AUSTRALIA: Pineapple success in the Northern Territory, as Piñata starts its 2019 harvest

One of Australia’s largest pineapple farms has emerged near the Northern Territory town of Humpty Doo.

Owned by the Queensland-based Piñata Farms, the NT property has almost 4 million pineapple plants in the ground this year. 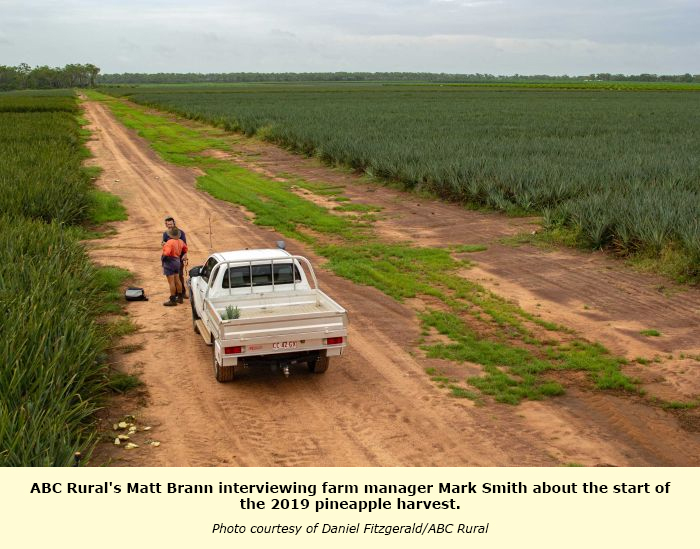 “We’re learning a lot and things are improving all of the time,” farm manager Mark Smith said.

“We’re really getting a handle on how to grow them properly near Darwin and looking at the crop this year — it’s looking excellent so far — we’ve got good size, great flavour, so can’t complain.”

The property was once home to the NT’s biggest banana farm, but is now the territory’s biggest fruit salad, with around 400 hectares dedicated to mango trees, bananas, pineapples and small trials of passionfruit and soursop.

The state’s peak body for horticulture, the NT Farmers Association, has long advocated that the key to being successful in northern agriculture is for businesses to “start small and grow big” — a motto that Piñata’s pineapple project has definitely followed.

The company, which has decades of experience growing pines in Queensland, planted its first NT trial in 2013 and produced a modest 30,000 trays of fruit.

Fast forward to 2019, the company is now in its fifth year of harvesting and aims to produce around 150,000 trays of pineapples this season, with picking extending through to September.

Pineapples from Humpty Doo are sold throughout the NT and trucked to markets in South Australia, Western Australia, Victoria and New South Wales.

“We don’t send them to Queensland though,” Mr Smith said.

“They’ve got enough of their own pineapples over there.”

On its website, Piñata described the NT pineapple project as “Australia’s most remote commercial pineapple farm”.