GHANA: Gov’t to supply 13.3 million variety of pineapples to farmers for 2019

The Ghana Export Promotion Authority (GEPA) has handed over two million pineapple suckers to two farmers in the eastern region of Ghana under the second phase of its pineapple supply base expansion program.

The ceremonial handing over to two of the county’s major pineapple exporters, Riverside Farms and Ohu Farms was performed by the Chief Executive Officer of the GEPA, Madam Afua Asabea Asare last Friday.

Many more farmers are to benefit from 13.3 million suckers being made available for distribution by GEPA, this year, to promote the cultivation and exportation of pineapples to enhance the country’s foreign exchange earnings.

GEPA in August, 2017, injected more than six million smooth cayenne (SC) pineapple suckers to 16 farmers in the region
under the first phase of the programme. 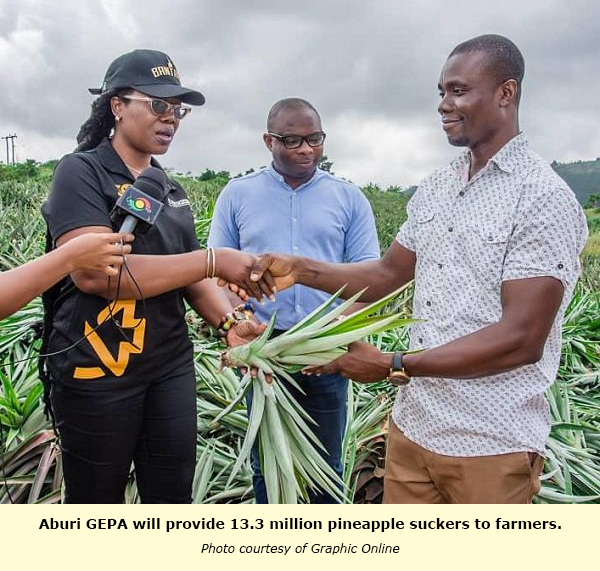 Madam Asabea Asare was accompanied by the Eastern Regional Director of the GEPA, Mr George Adomako, the Deputy Chief Executive Officer in Charge of Finance and Operations, Mr Samuel Dentu, the Director of Public Relations and Media Communications, Mrs Ruth Marfo and other staff of GEPA.

Having witnessed the success of the first distribution, Madam Asabea Asare challenged the farmers to work even harder at making the second phase even more successful.

She explained that the project was aimed at supporting farmers to enable the country meet the rather high demand in pineapple supply for both the local and international market.

GEPA is supplying 7.3 million of the SC, and three million each for MD2 suckers and sugarloaf suckers.

Madam Asabea Asare stated that the farmers would be supported and monitored to ensure that they produced healthy fruits.

Mr Adomako, in his welcome address stated that GEPA placed high premium on pineapple production due to its contribution to NTE growth.

Currently, pineapple export according to him was second to banana with respect to export revenue generation.

“Fresh pineapple exports for instance amounted to USD 18.1 million in 2017.

GEPA supplied 6,890,000 pinepple suckers to out growers and exporters during the first phase of the project in 2017 out of which 5,290,000 of the suckers was planted in the Eastern Region”, he stated.

The Project Coordinator of the Pineapple Supply Base Expansion Project, Mr Kwabena Barffuor, said there was more request for pinneapple suckers this year after a succesful supply in 2017 and 2018.

“Our checks indicate that it is very good to supply farmers with the plants, and we will supply more this year”, he assured.

One of the beneficiaries of the program, Mr Solomon Wiafe Ntow, CEO of the Golden Riverside Company, expressed his gratitude to the GEPA for their support.

He said, his company would deploy techniques learnt at trainings that were organised by their suppliers to exceed the expectation of GEPA.

Two exporter companies, Ohu Farms and Golden Riverside Farms have benefited from the GEPA Pineapple Supply Base Expansion programme with the supply of two million pineapple suckers to the two farmers.