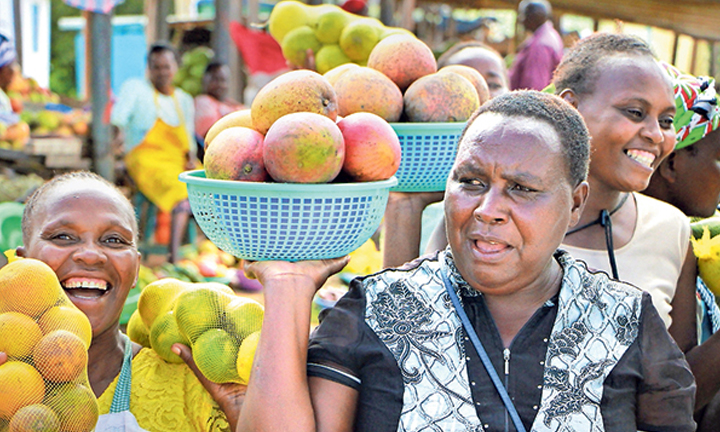 Traders sell mangoes along the Machakos-Wote road. Mangoes are the new gold in the region, with many residents picking thousands of shillings from the fruits, especially at this time when they are in season. SOURCE: Pius Maundu/Nation Media Group

A drive on the Machakos-Wote Road at this particular time of the year leaves many in awe, especially the first-time visitors.

The area is dotted with thousands of mango trees that can be spotted from afar, with their branches sagging under the weight of heavy, colourful fruits. The area is the Ukambani mango belt that stretches across the vast Makueni County.

Mangoes are the new gold in the county, with many residents picking thousands of shillings from the fruits, especially at this time when they are in season.

Phyllis Nduva’s mango orchard at Mwaani village is a spectacle to behold. One can count up to 50 fruits on each of her 400 trees, a majority ready for harvest.

Phyllis, just like many other commercial mango farmers in the region, grows the grafted varieties such as Apple, Kent, Tommy Artkins, Ngowe and Van Dyke.

These sweet mangoes are currently being sold in major towns such as Nairobi and Mombasa for Sh25 each. “We sell a kilo at Sh15. I harvest up to 10 tonnes of mangoes a season,” says Phyllis, adding that the fruits are now the biggest source of income for most households in the region.

She explains that the mangoes are propagated from grafted seedlings. “The rootstocks are from indigenous mango varieties that are grafted with scions from exotic ones, which are high-yielding,” she says.

According to her, indigenous mango varieties grow well in the arid region since they are highly resistant to pests and drought.

Farmers get grafted seedlings from a nursery established by the county government in collaboration with the Kenya Plant Health Inspectorate Services (Kephis), says Phyllis, who is also the chairperson of the 5,000-member Makueni County Fruit Processors Cooperative Society Limited.

The institution is among those behind the mango boom in the region. Mangoes thrive at 1,600 metres above sea level in various types of soils.

The area should be receiving rainfall averaging 500-1,000ml a year with temperatures ranging from 20 to 26 degrees Celsius, according to agronomists.

This largely explains why Makueni and other parts of Ukambani are leading in mango production, with the region having more than 4.31 million trees, according to Kephis. Phyllis grew up before the mango bug hit residents of the region.

Like most farmers in the area, for years she had placed her 20 acres under maize and pigeon peas. But this changed in the late 90s.

“This is when the Apple variety was introduced and stories were told of the fruit being a moneymaker. I was inspired by these tales and years later, they have turned out to be true,” she says, adding there was an aggressive campaign by government and development agencies to push people into mango farming.

Mangoes have now overtaken cotton and pigeon peas, among others, as the region’s cash crop.

“Apple mangoes are highly sought in the fresh and export markets for making juices, among other products,” says Phyllis as she looks at succulent dollops she has made from the fruits.

The mango trees start producing fruits three years after planting. This goes on for decades. They flower in June and the fruits mature around November and are picked until March.

Out of the 30 wards in Makueni, 18 are mango-producing zones, according to the county agriculture executive Lawrence Nzunga.

Phyllis, who sells her fruits locally and to export traders, started out with 100 seedlings in 2000, some of which dried up before they reached the flowering stage. This did not weigh her down, as she kept on replacing them until she reached the current number.

“The trick to having a sizeable mango plantation is to keep replacing those that die,” she says, noting the main challenge is glut, which leads to a reduction in prices. The cost of transporting mangoes to the market is also huge, especially when it rains.

Phyllis sets pheromone traps on her orchard at the start of the mango flowering stage to curb fruit flies, another major challenge for the crop, alongside diseases like powdery mildew, Anthracnose and rust.

She refills the traps two months later, at the fruiting stage. This, she says, ensures that the traps are effective.

International Centre of Insect Physiology and Ecology (Icipe) uses Phyllis’s farm as a model on pest management technologies, including the use of the traps. Like many other farmers, she grows the fruits in zai pits to beat the dry weather.

The three-by-three-by-three-foot pits are filled with mulch at the bottom followed by the top soil up to 2 feet high before the seedlings are introduced when it rains. She intercrops mangoes with cowpeas and green grams.

Intercropping enables one to get more from the farm. “The cover crops also keep the farm fertile by preventing soil erosion and fixing nitrogen into the soil,” she says.

Phyllis advises that mangoes should not be intercropped with maize “because the flowering of maize hinders their pollination”.

“One way of increasing the production of mango trees is to sink shallow basins around the root zone and then fill them with manure. They hold water when it rains and enable the plants access it easily.

“Another way of intensifying production is by pruning the dormant branches. This enhances pest management and boosts production,” she says. Mary Kilungu, another mango farmer, says she has 50 trees on her farm.

“This year has been good because the fruits did not only produce well but prices are also better,” says Mary, adding she has earned more than Sh120,000 (USD 1,188) from mangoes since November.

Mary sells most of the fruits to traders who take them to Nairobi markets. The income has enabled her to keep her three children in secondary schools.

According to her, the marketing of mangoes is often complicated by the fact that they ripen at the same time. To address the challenge, experts are advising farmers to diversify the varieties.

Agriculture and Food Authority official Nichodemus Ngeka says farmers should consider growing varieties that mature late to dominate the markets when most of the other varieties are exhausted.

Most farmers sell their mangoes through co-operative societies. After supplying the Makueni Fruits Factory, they also sell their fruits to traders at Sh15 (USD 0.15) a kilo, who deliver them to Mombasa, Nairobi and all major towns in the country.

Exporters also buy high-grade fruits at Sh40 (USD 0.40) a kilo. Dipesh Devraj, the commercial and operations director at Keitt Exporters Limited, says the company exports 60 tonnes of mangoes daily to the Middle East when they are in season.
“More than 90 per cent of the mangoes we export come from Makueni,” he says.

Although mangoes are expected to earn Makueni farmers more than Sh5 billion (USD 50 million) every season, according to USAID, almost half of the money is lost to attacks by pests and post-harvest losses.

This is compounded by farmers’ lack of knowledge on post-harvest management. But the setting-up Makueni Fruits Processing Plant at Kalamba offered relief, though it cannot absorb all the fruits grown in the region.

The factory buys mangoes at Sh18 (USD 0.18) a kilo and crushes them into purée, which is then sold to juice-manufacturing companies.