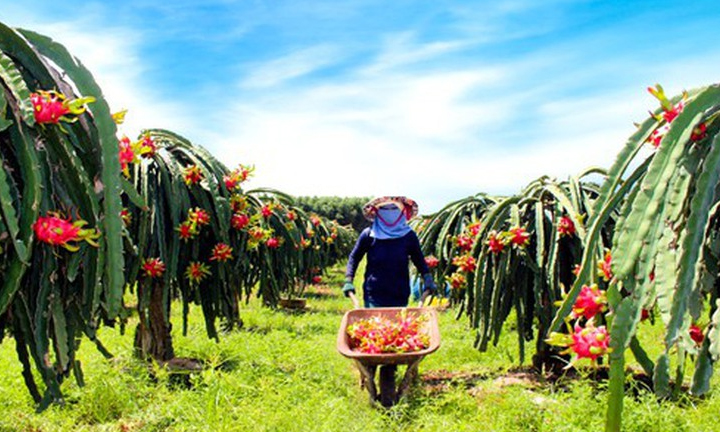 Dragon fruits are classified as a key export fruit product and often in the groups of commodities in Vietnam registered export sales of more than US$1 billion each.

Despite the fact Vietnamese dragon fruit has access to several global markets, including China, Thailand and Indonesia, and more, China still accounts for 80 percent of overall exports, according to Vu Ba Phu, director-general of the Trade Promotion Agency under the Ministry of Industry and Trade.

However, the Asia Africa Market Department under the Ministry of Industry and Trade said that Vietnam’s dragon fruit and fresh fruit exports to China are currently facing difficulties due to the tightened customs clearance and quarantine at some border gates between two countries due to the Covid-19 epidemic.

But, many experts believe that Vietnam’s dragon fruit and fresh fruit exports have been facing difficulties not only at present but prior also because Chinese farmers have planted dragon fruit trees with a total area of up to 35,555 hectares.

Mr. Phu fretted Chinese farmers will apply technology to increase productivity bringing competitive pressure to Vietnamese fruit not only in China but the world’s market.

According to statistics from China Customs, in the first five months of the year, China’s imports of dragon fruit decreased by 21.6 percent over the same period in 2020. Vietnam’s imported dragon fruit decreased by 21.6 percent in volume and 21.1 percent in value. This shows that China has been reducing imports of agricultural products that they can cultivate.

Experts said it is necessary to quickly find potential markets in the EU, North America, Japan, Australia, the Middle East to help businesses build their branding and promote export for the long-term plan. In fact, in recent years, Vietnamese dragon fruits have been also exported to India, New Zealand, Japan, Chile in addition to Chine. Lately, dragon fruit has been sold to Australia, India, Pakistan.

After the Vietnam Trade Office in Australia has organized a Vietnamese dragon fruit week in large Australian cities from July to October to promote the export of the fruit, it said that the import demand for dragon fruits of distribution partners in this country is quite high.

Currently, each dragon fruit is sold at Australia’s leading supermarket chain Coles at US$4.9 or VND80,000 while it fetches AUD9 – AUD 15 per kilogram at supermarket chains such as MCQ and supermarkets, shops in Melbourne, Adelaide, Sydney of Australia

According to Mr. Pham Sanh Chau, Vietnamese Ambassador to India, the market is very potential for dragon fruit and fresh fruit of Vietnam. India has a population of 1.4 billion, of which 60 percent are vegetarians. Their food is mainly vegetables. On average, each Indian person has 3 kilograms of fruit a month; thereby, India will consume about 48 million tons of fruits each year.

The country has so far mainly imported dragon fruit from Thailand, Malaysia and Sri Lanka. Nguyen Tien Phong, Vietnamese Ambassador to Pakistan, said this country of more than 200 million residents is also a potential market for Vietnamese dragon fruit and fresh fruits.

However, Mr. Phu said, Vietnamese dragon fruit is facing fierce competition with other suppliers in Taiwan, Thailand, Malaysia. To dominate the market, Vietnam needs to improve the quality of the fruit and do not expand the cultivation area. Mr. Phu shared a lot of foreign importers are interested in developing a supply of high-quality dragon fruit from Vietnam at online trade events over the past time.