Distribution:
There are three Horticultural Races of avocado namely, Mexican, Guatemalan and West Indian. West Indian cultivars have large, smooth, shiny-skinned fruits containing more water and less fat (monounsaturated oil) than the other groups. They are sometimes marketed as “lite” avocados with fewer calories. They are typically grown in warm, tropical climates, such as southern Floridaand the Hawaiian Islands. The Guatemalan group was originally from the highlands of Guatemala. Cultivars in this group can be grown in more temperate climates than the West Indian group. A popular Guatemalan cultivar grown in southern Californiais the ‘Hass,’ easily recognizable by its thick, black, rough-skinned fruit. The Mexican group includes some of the hardiest and most commonly grown cultivars in southern California, including ‘Duke,’ ‘Mexicola,’ and ‘Zutano.’  The followings are some of the characteristics of the three avocado races:
a) Mexican 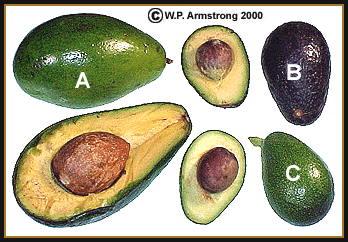 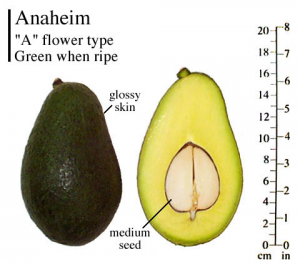 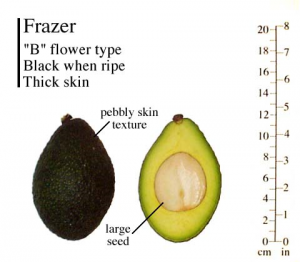 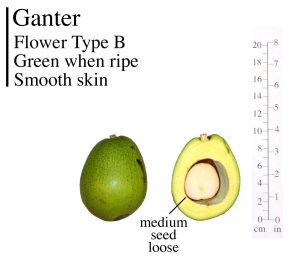 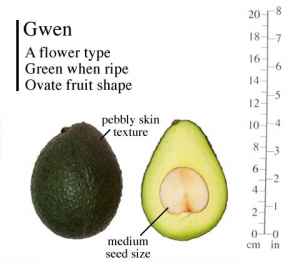 Harvest: Open pollinated ‘Gwen’ seedling. Average fruit weight: 255 g. Average skin thickness: 1.7 mm. Has a strong tendency to alternate bear. Tree habit: open tree.
Hass: Origin Rudolph Hass,La HabraHeights, 1926. It is seedling ofLyon.Guatemala. It is a cultivar of avocado with dark-colored, bumpy skin. Tree is rather open, not tall. Fruit is medium, to 340 g, pyriform, skin thick, pebbled, coppery purple. Flesh good, oil 19%, seed fairly small. It is the most important avocado in the commercial market worldwide. In theUnited States, it accounts for more than 80% of the avocado crop, and it is also the most widely grown avocado inNew Zealand. It produces a medium-sized fruit, weighing 200-300 g. The skin turns a dark, purplish-black when ripe, while the skin of “green” cultivars remains green. When ripe, it yields to gentle pressure; soft avocados are generally considered over-ripe and possibly rancid.
Jim: Origin John Reinecke, San Diego, 1939. Hybrid. Tree is upright. Fruit small to medium, to 284 g, olive green, with long neck, oil 12%. 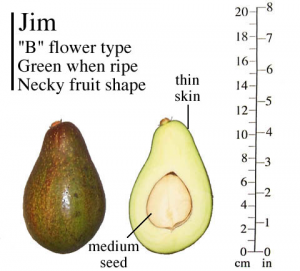 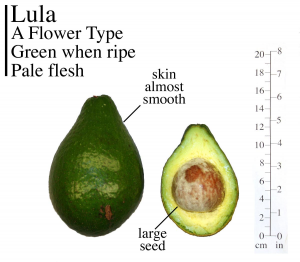 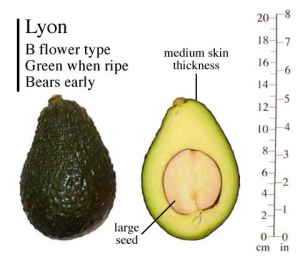 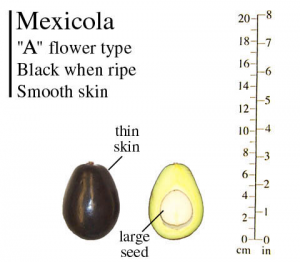 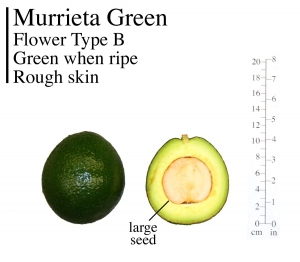 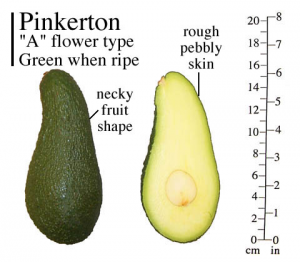 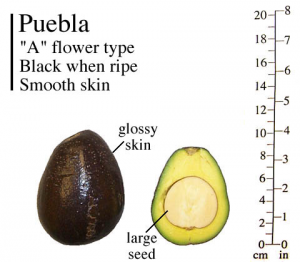 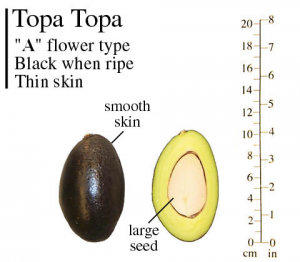 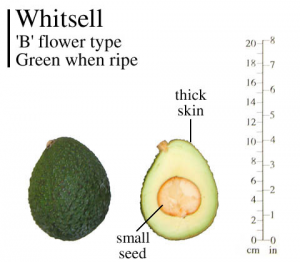 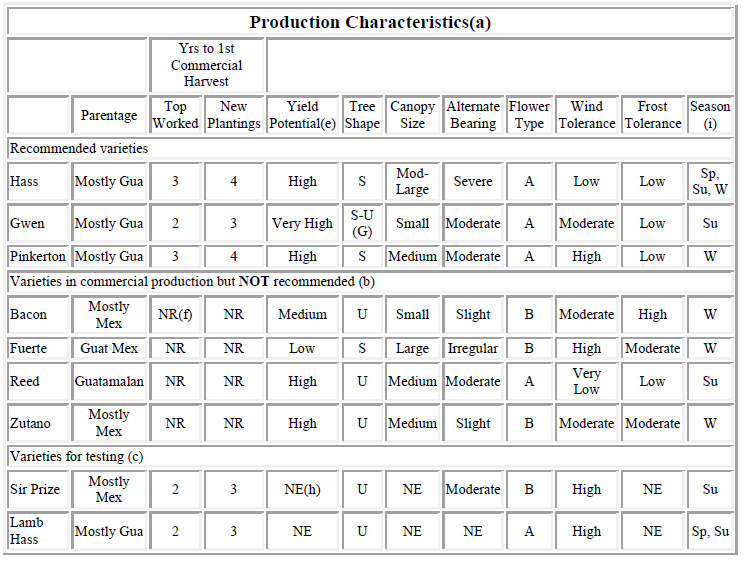 a – General characteristics may vary according to climatic zones for all varieties
b – Other minor varieties including Anaheim, Covacado, Jim, McArthur, Rincon, Santana, Susan are also not recommended.
c – These varieties are considered to show promise, but need limited commercial testing. Data presented is only tentative.
d – Topworked trees may exhibit different tree shape. S=Spreading; U=Upright; I=Irregular.
e – Yields may be enhanced by cross pollination with opposite flower type which blooms at the same time.
f – NR = Not Recommended
g – Topworked trees tend to be more upright.
h – NE = not established
i – Fruiting Season: W=winter, SP=spring, Su=summer, Fa=fall 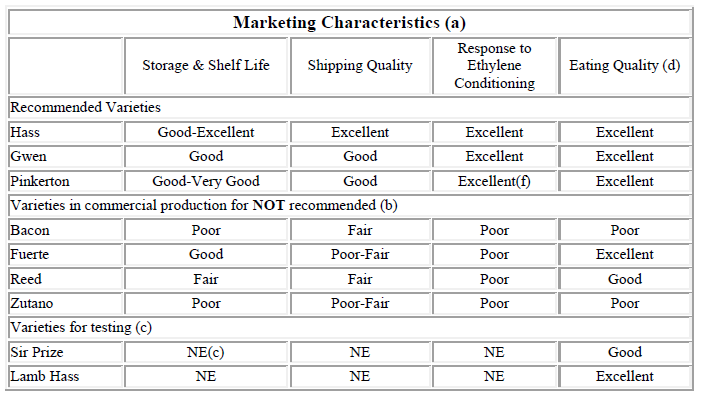 a – General characteristics may vary according to climatic zones for all varieties.
b – Other minor varieties including Anaheim, Covacado, Jim, McArthur, Rincon, Santana, Susan are also not recommended.
c – These varieties are considered to show promise, but need limited commercial testing. Data presented is only tentative.
d – Data presented from California Avocado Commission Consumer Taste Panel (1986-87) for all varieties except Whitsell.
e – NE = Not Established
f – Early season Pinkerton require ethylene conditioning for satisfactory ripening.

Many varieties have been introduced intoPhilippinessince 1903 and most of them have been lost. Today, only a few varieties exist. Most of them are selections from local seedling trees, and they are confined to only a few nurseries and backyards. Depending upon the variety, the plants are set at 8-10 m apart to give a population of 100-156 trees per hectare.
These are:
Cardinal: The fruit bottlenecked with an average weight of 400 grams. The skin is reddish-purple and thick (1.3 mm). The seed is small (40 g) and is loose to tight in the cavity. The flesh is yellow, moderately fibrous and constitutes 80 per cent of the whole fruit by weight.
Calma: The fruit ovoid and weighing 600 grams. The skin is reddish-purple and intermedi 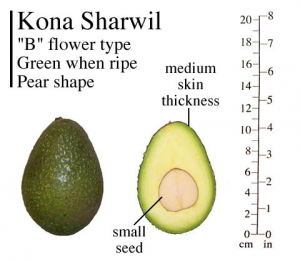 ‘Pinkerton’: a Mexican/Guatemalan hybrid. It was bred inCalifornia and crops heavily and reliably in most districts inAustralia. It has an A-type flower and the tree is semi-dwarf in habit. Fruits are green-skinned with a slight pebbly texture and a long neck. 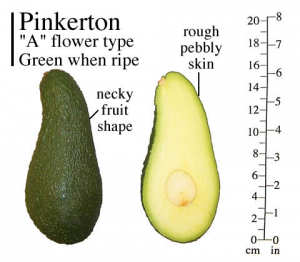 ‘Hass’: currently the most important cultivar and grown in all districts inAustralia. ‘Hass’ was selected inCalifornia. The tree is upright and vigorous with an A-flower type. It produces ovate fruit with a pebbly skin that changes from green to black when ripening. ‘Hass’ is a late-maturing variety with some tolerance to fruit diseases and pests. Crops are heavy and reliable as long as fruits are not hung too late. Fruit size tends to be small in the warmer areas of production.
‘Reed’ and ‘Wurtz’: two late maturing cultivars of minor importance. ‘Reed’ is a prolific-cropping cultivar with large, round, green-skinned fruit of excellent quality. It is a cultivar of the Guatemalan race and trees are upright and semi-vigorous. ‘Wurtz’ has a pear-shaped, green-skinned fruit which it bears on a densely foliaged, semi-dwarf tree with a weeping habit. Cropping can be strongly biennial
A major part of the avocado area in theIsraelis along the coastal plain, but notable growing area is located in the interior hot valleys. Three-quarters of the total avocado areas in the country are planted on various types of Grumusols, heavy-textured soils containing 8-20% lime (CaCO3), with pH 7.8 – 8.2 and with fair internal drainage. In the coastal plain, some
orchards are planted on loamy sends with no lime (pH 7-7.3) or, in the south-west, with 5-10% lime.In the Sea of Galilee Valley, some orchards are planted on very calcareous soils (40% CaCO3), with trees grafted on specific adaptable rootstocks. Since 1995, the cultivars planted are: ‘Fuerte’ – 25%, ‘Ettinger’ – 25%, ‘Hass’ – 30%, ‘Nabal’ – 4% and ‘Reed’ – 6% and recently the local cultivars (as shown below) are introduced for commercial production.
Presently, the main commercial avocado cultivars are from California namely ‘Fuerte’, ‘Hass’, ‘Nabal’, ‘Reed’, ‘Pinkerton’, ‘Ardith’   except ‘Ettinger’ which is a local selection of a chance seedling. Parentage is unknown, but it contains certain traits of the Mexican race such as tolerance to low temperatures (4 hours of -6°C in a mature tree) and thin skin. Harvest season is early but short: mainly October through November. Bright green skinned, with good commercial size. High internal quality and yields are good to medium. It is also a potent pollinizer to ‘Hass’ and ‘Pinkerton’ (and perhaps additional cultivars).
Reference: