How do you count the number of mangoes on your farm so that you get a fair price?

And what’s a clever-but-cheap way for a farmer to cut down his irrigation bill?

Agriculture in sub-Saharan Africa may have the image of relentless toil and low productivity, but experts say new tech is changing the picture.

Farmers, crop buyers and other sector professionals have started to harness smart gadgets and crunch numbers to improve productivity, reduce costs and smooth out wrinkles in the markets, they say. 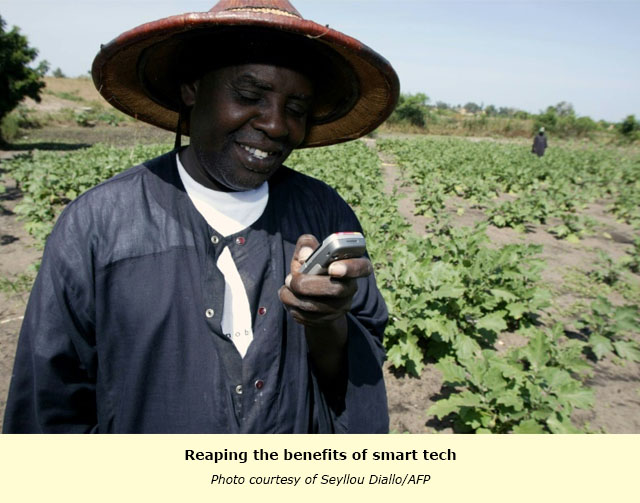 “Around the continent, there are excellent researchers in information technology — digital agriculture is a real opportunity for qualified young Africans.”

The idea of directly linking farmers to consumers, cutting out wholesalers and stores is a familiar story in Europe and North America.

Awa Thiam, a 28-year-old telecoms engineer, is following suit in her native Senegal.

The company she founded, Lifantou, connects school canteens with farming cooperatives with the help of big data.

“There’s a huge need for this,” Thiam said, showcasing her work at an agri-tech conference in Dakar last month.

“Today, between 25 and 50 percent of the cost of school meals goes to intermediaries, but schools have limited budgets. If you shorten the supply chain, canteens can bring down the cost of meals and offer the children more varied menus.”

Her one-stop platform draws on a databank of crop production and schools to match potential demand with supply.

It group-purchases to lower the cost for schools and in a final flourish organises the transport of the goods, with operations monitored in real time.

A project called Pix Fruit, meanwhile, aims to help farmers who have until now estimated their mango crop by counting the fruit on a bunch of trees and then extrapolating for the whole plantation.

This rough-and-ready method has considerable room for error.

Emile Faye, a French researcher in digital agro-ecology who works for Pix Fruit, says the margin for mistakes could be as much as a factor of 10.

A purchaser, for instance, could pay the price for two tonnes of mangos while taking delivery of 20 tonnes from the farmer, although errors may go either way.

Using a smartphone, the farmer takes photos of a selection of trees in his fields.

Fruit-recognition technology then calculates the likely overall harvest, drawing on a databank compiled with the help of drones that also includes information on climate, soil and administrative constraints.

That way, farmers learn the true worth of their crop, while wholesalers and price negotiators have a better take on the risk of glut or undersupply.

The system, jointly developed by CIRAD and the Senegalese Institute for Agricultural Research, could be extended to coffee, lychees and citrus fruits.

That the smart phone should play such a central role is no surprise.

The advent of the mobile helped Africa to leapfrog the cost of installing landlines, spurring innovative use, from ride-sharing to money transfer.

The pioneering work is now spreading into the rural world.

The continent’s third-most downloaded apps, according to Africa.com, is Esoko, which collects and shares crop prices, provides weather information and farming tips, and arranges payment via a mobile money system.

The Widim Pump, made by a Dakar firm called Nano Air, is a box controlled by SMS messages that a farmer sends to manage his irrigation system.

The savings are substantial, even for poor peasant families, says Oumar Basse, a 27-year-old engineer and the company’s co-founder.

“There’s no more need for the farmer to walk several kilometres (miles) every day or use up fuel or hire someone to monitor the pumps.

“He can switch on the water or turn off the supply using his mobile phone.”

With 12 employees after two years in operation, Nanoair has sold 250 Widim systems and received orders from Morocco and Zambia.

Basse has also founded another firm helping with handling deliveries and after-sales services.