Pineapple varieties are grown for a variety of purposes: for fiber, as an ornamental and, most famously, as a delicious fruit. Scientists at the Carl R. Woese Institute for Genomic Biology at the University of Illinois sequenced the genome of the red pineapple and compared it to the genomes of several other cultivars.

Their efforts — detailed in the journal Nature Genetics — revealed evidence supporting their hypothesis, that pineapples can be domesticated in a single step, sans seeds, using cuttings and other methods. 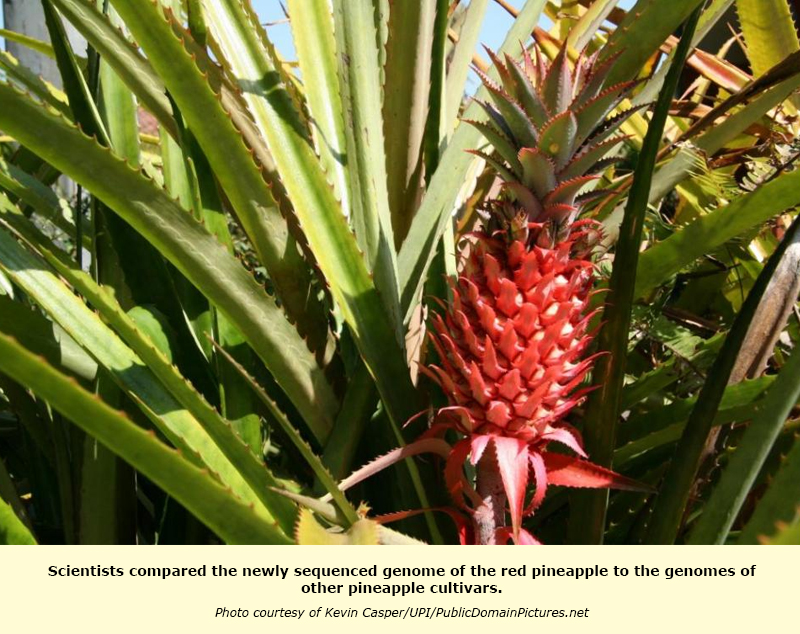 “We have chosen major pineapple cultivars worldwide … to test our hypothesis of ‘one-step operation’ in domestication of clonally propagated crops,” Ray Ming, a professor of plant biology at the University of Illinois, said in a news release.

Though scientists sequenced the genomes of several pineapple cultivars, they focused primarily on Ananas comosus var. bracteatus, commonly known as the red pineapple, a small variety grown for fiber and as a decorative plant in gardens. It is one of the few pineapple cultivars capable of self-pollination.

By comparing the genomes of several different pineapple cultivars, scientists were able to identify the influence of natural and artificial selection on specific traits.

Prior to their sequencing efforts, scientists hypothesized that some cultivars were domesticated in a single step by growing a new variety using the cutting from a singe plant with advantageous traits. Scientists developed an analytical method to look for evidence of such a domestication history by looking for long strings of similar genetic sequences at the ends of chromosomes.

The genomic evidence suggests clonal reproduction was used over thousands of years — single-step domestication, repeated for millennia — to produce certain pineapple cultivars. The same method of genomic analysis could be used to study the domestication histories of other clonally propagated crops, including potato, sugarcane, cassava and banana.