Six varieties of “standout” Taiwanese lychee trees have been planted on a Yeppoon farm after a long journey from Taiwan, a year in quarantine in Melbourne, a flight to Brisbane, and a road trip to Yeppoon.

Ian Groves is the farmer at the centre of the trial and he said it was an exciting opportunity for farmers and consumers. “If you line them up side by side there’s actually a whole range of flavours in lychees that most people haven’t yet discovered. So adding to that list I think is an exciting prospect for the future.” 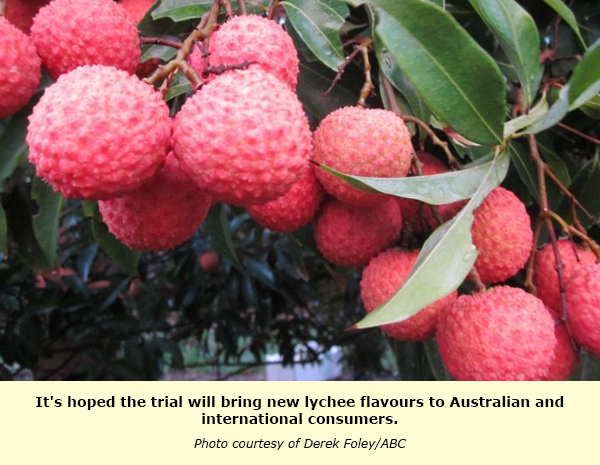 Taiwan looks to Australia to expand fruit production
Taiwan is widely recognised for its successful tropical fruit breeding programs but, due to limited farming land, was looking to link with overseas partners to expand production. “The average farmer in Taiwan owns one hectare, so it’s a small-scale farming system,” Taiwanese Council of Agriculture deputy minister J J Chen said.

Talks for the lychee trial between Taiwan and Australia began in 2016 and was formalized two years ago through a Memorandum of Understanding.

The project is expected to span decades with lychee trees slow to establish. “It’s a very long-term project and I may be going a little grey on top but my son is here who will be farming on for a long time to come,” Mr Groves said.

Growth in tropical fruit space
It’s hoped the trial will bring new flavours of the popular summer fruit to Australian and international consumers in time.

President of the Australian Lychee Growers Association Derek Foley said the project was in its early stages, but commercial modelling was in sight. “As those trees get bigger we’ll then be able to take other marcotts [a root system from grafting branches] off and other selective growers will have similar trial plots across different climatic areas within Queensland predominantly,” he said.”The propagation is a slow process and then of course the commercial model is the next thing … that hasn’t been worked out yet … one step at a time.”

Department of Agriculture and Fisheries director of tropical fruit Nick Macleod said the growing relationship with Taiwan would also help Australia to grow in the tropical fruit space. “Taiwan has an excellent reputation for research in the tropical fruit space so we’re very fortunate to have this opportunity to work more closely with them,” Mr Macleod said. “The banana industry in Australia is really threatened by the new panama tropical race four disease. “They’ve got a breeding program, which has some varieties with some resistance to that particular disease, so our industry is very keen to trial that here in Queensland.”