Despite its exotic appearance, dragon fruit has struggled to take off in South Africa due to its generally bland taste.

But it was the striking appearance and globally acknowledged health benefits of the fruit that caught Howard Blight’s attention five years ago and led him on a journey to cultivate sweeter varieties. 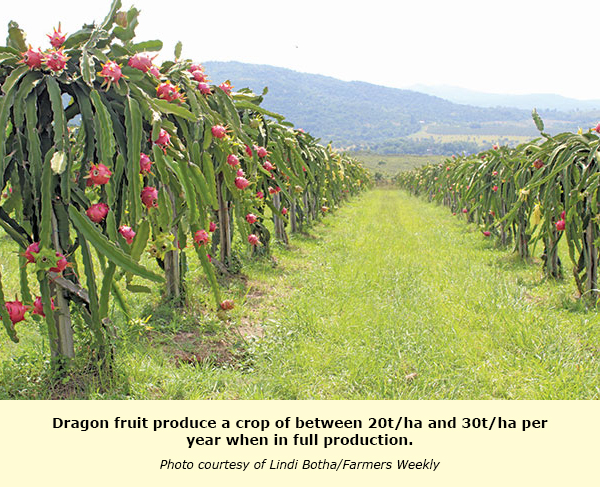 Today, Blight’s commercial nursery, Amorentia, near Tzaneen in Limpopo, has six cultivars with Brix levels between 14 and 19.5, providing luscious, sweet fruit that do their appearance justice. A further five varieties are currently being tested to further expand the portfolio to licensed growers.

Blight says that branding the cultivars has been especially important to create a differentiation between the new, sweet cultivars and the earlier, bland varieties on the market.

“We’ve trademarked Amorentia Sweet Dragon Fruit, and all our cultivars will carry this branding. A strong focus on marketing this brand will ensure a greater take-off in the market.”

Other advantages
In addition to providing many health benefits to consumers, dragon fruit has much to offer the agriculture sector.

It can be grown in areas where many other crops would fail, as it can withstand high temperatures and low rainfall. (It requires 35% less water than avocados, for example.)

This gives it a decided advantage in a country with growing water challenges. It can also be planted at a high density, which means that it requires only a small piece of land, making it an ideal crop for small-scale farmers.

“Dragon fruit can therefore play a big role in agricultural transformation. It doesn’t require a sophisticated operation and you can be in production by the second year,” says Blight.

Dragon fruit prefers a drier, subtropical to tropical climate, and does well in areas where macadamia nuts, avocados and bananas are grown commercially. Suitable temperatures for the crop are between 21°C and 29°C, but it can withstand a maximum temperature of 41°C and a minimum temperature as low as -1°C for short periods, as long as there is no frost.

The crop has a rainfall requirement of between 600 mm and 1,300 mm a year, with supplementary irrigation in the dry seasons. The total water requirement annually is around 3,200 m²/ha, and higher rainfall areas will have reduced irrigation requirements.

Establishing an orchard
Dragon fruit is usually planted at a spacing of 2.5 m between plants and a 5 m inter-row spacing, providing an ultra-high density of 1,250 plants/ha.

Reinforced concrete posts are required to hold up the vines. Each plant is trained up a single post or precast concrete post protruding 1.8m out of the ground.

Attached to the top of the support post is a steel cross-brace mounted inside an old motorbike or car tyre, through which the production laterals or branches are trained to spread out and then hang down towards the ground.

It is on these laterals that the dragon fruit flowers and fruit set occurs. Laterals can also be cut and placed in soil to produce another plant.

Blight notes that the plant does not like wet feet, and planting on ridges in well-drained soil will prevent fruit split and flower drop that result from excessively wet soil.

A high organic compost content of at least 50% is advisable. While dragon fruit needs plenty of zinc and boron, the exact fertilizer requirements must be determined through leaf analysis. According to Blight, there is a theory that adding phosphates 15 days before harvest results in sweeter fruit, but this must still be thoroughly tested.

Four harvests a year
Dragon fruit is a summer crop that bears fruit from December to May. However, as it is a long-day plant, Amorentia is experimenting with extending the light hours to expand the season.

“In other parts of the world, farmers use artificial lighting to produce a winter crop. Dragon fruit needs up to 12 hours of light to stimulate flowering, and by growing the fruit under lights for an additional few hours in the winter months, we’re hoping to extend the production potential. However, we’re still in the process of testing the Brix levels as they could be negatively affected by the lack of natural sunlight,” Blight explains.

The plant flowers four or five times a year and takes 40 days from flowering to produce a fuchsia-pink fruit that is ready for harvest. This results in four harvests a year. Between six and eight beehives per hectare are required for pollination.

Blight adds that while all of Amorentia’s dragon fruit are naturally pollinated, this is not the case with all varieties, with some requiring human intervention, which increases labor costs. Farmers are advised to plant crops that attract bees into the orchards, such as sweet basil or lavender, to enhance pollination.

Under good growing conditions, dragon fruit will yield its first fruit at two years old and be in full production by year five, when it will average 20 t/ha to 30 t/ha per year. The fruit size can vary from 200 g to 1 kg.

“Because dragon fruit is quite expensive, one needs to bring down the unit price, and therefore smaller fruit will be preferred by consumers, with the large fruit going to catering industries.”

The plants have a lifespan of 20 years, after which they need to be replaced.

Blight says dragon fruit are not adversely affected by pests and diseases, as long as the initial planting material is free of Xanthomonas campestris, which causes stem rot.

“Anthracnose is a minor problem and we’re in the process of having a copper product registered for use on dragon fruit. It’s also important to do manual, rather than chemical, weeding, as any drift of herbicide onto the stem is detrimental.”

The crop has a labor requirement of two people per hectare all year round, with more hands required at harvest. The fruit is picked when ripe, using scissors to prevent the skin from tearing, and handled gently and packed in cartons to prevent the scales on the fruit from being damaged.

It is packed and stored at a temperature of between 10°C and 14°C for local distribution, and has a shelf life of two to three weeks.

Dragon fruit can also be cold-stored at 3°C to 5°C for export, resulting in a storage life of 27 to 42 days. This makes it ideal for sea freighting to Europe and the Middle East.

Blight says a further advantage of growing dragon fruit is that the same packing lines and infrastructure required to pack avocados can be used.

“It’s also counter-seasonal to avocados, so avocado producers have the opportunity to extend production on their farms to a year-round operation.”

Persuading consumers
With initial varieties grown in South Africa producing bland-tasting fruit, Blight realised that not only was it necessary to investigate varieties that could produce consistently sweet fruit, but consumer education would be needed to revive interest.

“The University of California in the US is doing research into sweet varieties, and growing these will eventually raise the bar for the fruit globally,” he says.

“We’ve imported sweet varieties and tested them for two years locally to ensure they met what we were looking for, namely sweet fruit that’s naturally pollinated. The minimum Brix level should be 12, but our varieties’ levels are higher, with varying flesh colors ranging from white to soft pink and crimson.

“With the mixed reactions from the few people who’ve tried dragon fruit, we have a lot of work to do to establish the industry and build confidence in the market. Much of the income we receive from licensed growers will therefore go-to branding and marketing. We need to differentiate ourselves from the blander varieties so consumers know what to buy. It’s important that they don’t taste the older varieties and walk away with a bad impression, not wanting to buy it again.”

Blight believes that dragon fruit will be the next big subtropical crop in South Africa, and there is much potential on the local and export markets.

“Vietnam produces one million tons of dragon fruit a year, equivalent to four times the size of our avocado industry. Most of it is exported, as there is a big demand for superfoods globally. Dragon fruit also stabilizes the blood sugar, so it’s good for diabetics. There are many opportunities on the market for dragon fruit and the industry is ripe for development.”