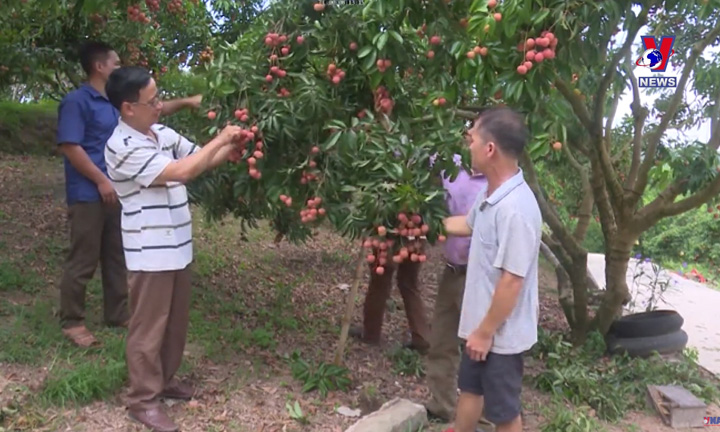 PHOTO: Bac Giang is now cultivating 15,000 hectares of litchi under VietGAP standards, or 53 percent of the province’s total, with output estimated at 110,000 tonnes, or nearly 69 percent of the total. SOURCE: Vietnam Plus

Bac Giang province has worked with the Plant Protection Department at the Ministry of Agriculture and Rural Development and exporting enterprises to prepare documents, conduct surveys, and issue codes for a planting area of 50 hectares of “thieu” litchi, for export to Japan.

On harvest day, Vi Van Thanh’s household is filled with laughter and joy, as his lychee will be exported to Japan. To export to such a choosy market, Thanh said, he had to meet strict requirements and comply with technical processes under the direction of officials from the province, district, and commune.

Like Thanh’s household, Luong Van Canh’s family has grown 2 hectares of litchi and he has applied GlobalGAP standards so they can be exported to Japan. He has also installed a surveillance camera system to monitor the entire process. His orchard will provide about 10 tonnes of the fruit at a price of some 30,000 VND per kg.

Luc Ngan district has pushed forward with the application of technology in cultivation and production, and coordinated with specialised agencies to build production models under VietGAP standards. Its litchi growing area increased to 15 hectares this year, with the participation of 12 households. Output is expected to hit 30 tonnes. The households have been taught techniques on taking care of the trees and using pest control, as well as other techniques that follow VietGAP standards. This is a modern farming method that ensures the safety of growers and limits the level of preservatives, pesticides, and fertilisers, making the crop more environmentally friendly. In the year to come, the province plans to expand the model and create an economic pillar.

Bac Giang is now cultivating 15,000 hectares of litchi under VietGAP standards, or 53 percent of the province’s total, with output estimated at 110,000 tonnes, or nearly 69 percent of the total. The litchi area that meets GlobalGap standards is 80 hectares, and yields 500 tonnes. The process of selecting the right exporters is also important. Two – the Chanh Thu Fruit Import and Export Company and the AMEII Vietnam Joint Stock Company – have signed contracts and purchased litchi from Luc Ngan for export to Japan. Both are impressed by the quality of the local fruit.

Bac Giang’s lychee crop in 2020 is expected to be successful, totalling an estimated 160,000 tons, or about 10,000 tons higher than in 2019. Bac Giang lychee used to be mostly exported to China, but in recent years has been sent to choosy markets with high prices, such as the US and Australia. Japan approved the importation of litchi grown under VietGAP and GlobalGAP standards this year, presenting a major opportunity for Vietnamese lychee exports in general and Bac Giang province in particular.

In order to ensure the market and maintain the value of the litchi, Bac Giang will continue to promote and encourage local people to grow more agriculture products that meet VietGAP standards. At the same time, it will develop markets via fairs, marketing, advertising, and trade promotions. The province is also implementing policies to encourage State-owned and private enterprises to sign purchase contracts with local farmers.