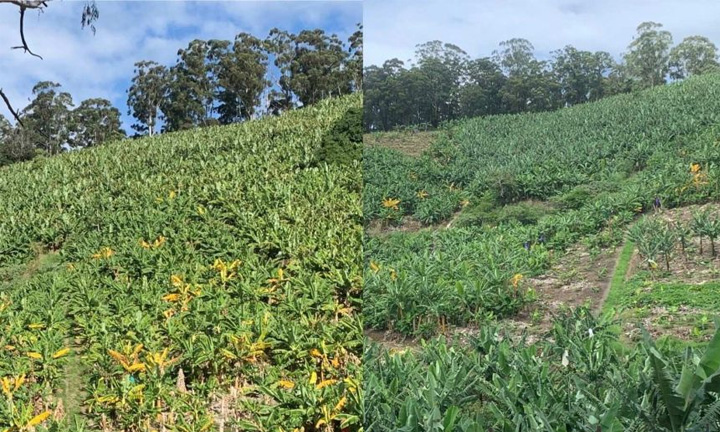 PHOTO: Before and after: one farm has had to cut down half their banana crop due to the disease. SOURCE: ABC Rural

The disease, Panama disease race 1, is threatening a banana supply shortage of the Lady Finger and Ducasse banana varieties.

One grower based in Boambee near Coffs Harbour, who wishes to remain anonymous, expects to lose his entire crop to the disease.

“We’ve had Ducasse in for about six years and in the last year I think we’ve lost 50 per cent [of the crop],” he said.

“I reckon there is probably one more year left and the rest will be all gone.”

“With all this rain, it’s still spreading … and it’s not spreading from tree to tree it’s just coming out everywhere.”

The farmer is now preparing to grow the most popular variety, Cavendish bananas, as they are not affected by race 1 of the disease.

But the transition will cost him a year’s worth of income.

“I’ve lost half of my income [already] and then it’s just a matter of now planting another variety and losing a year on that land until that comes up and gets into production,” he said.

“It’s a soil-borne disease so it can move with water or it can wash down stream to another farm,” Mr Gately said.

“It can even just be picked up on mud on tyres.”

The region has received high summer rainfall, recording more than 170 millimetres of rainfall in early January.

High rainfall in the mountainous area provides the ideal conditions for fungal spores to spread to surrounding properties, especially when the run-off crosses a road.

“They only have to pick up a couple of these spores that come out and it can transfer to any other farm with the varieties quite easily,” Mr Gately said.

The disease is highly infectious and can quickly wipe out an entire banana crop.

“Once it gets into the crop that’s the loss of the plant and as it spreads you lose more plants, so the [infected] area grows,” Mr Gately said.

“You might have one plant loss now but, all of a sudden, next thing you know there is 10 then 20 plants gone.

“So your production is gone, and you can’t grow that variety because it’s just going to kill you out.”

Growers urged to report
The NSW Farmers Association is aware of several infected farms in the Coffs Harbour area and surrounding regions.

A spokesman said growers with infected crops had a responsibility to stop the disease spreading to their neighbors.

According to the association, prevention measures could include sewer traps or hay bales to stem run-off.

“If these matters aren’t resolved it can easily end up as a legal issue,” the spokesman said.

“Farmers have a duty of care towards their neighbors when it comes to controlling these sort of things.”