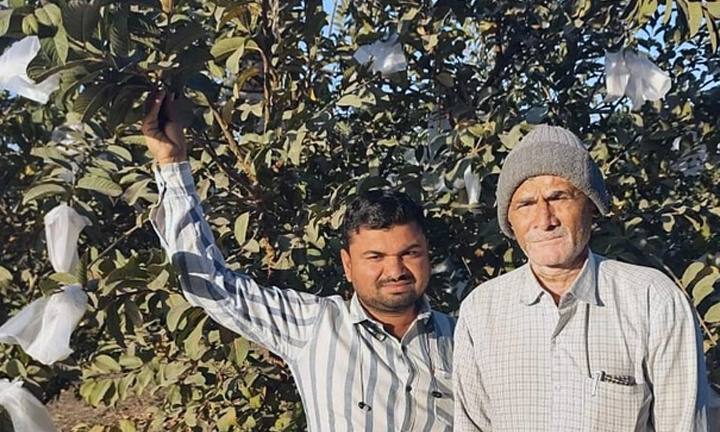 PHOTO: Magan Kamariya, a farmer from Gujarat’s Morbi village was struggling to sustain his family till jumbo guavas came to his rescue. Weighing about 1.5 Kg each, they helped him earn Rs 20 lakh (USD 27,600) in a year. SOURCE: Himanshu Nitnaware, The Better India

Magan Kamariya from Morbi village in Gujarat was a traditional vegetable farmer with a 15-acre land. On it, he would grow groundnut, cotton, cumin and other vegetables, but conventional farming failed to reap many profits. In fact, it barely helped his six-member family survive.

“Earlier, income had been very unsteady, we were earning only about Rs 14,000 (USD 193) an acre. Yearly profits never exceeded Rs 5 lakh (USD 6,910). Less income made it difficult to meet expenses for education and daily needs of the family,” he recalls.

Unsatisfied with meagre earnings, he decided to quit and invest in another business. But in 2015, his son Chirag introduced him to a Thai variety of guava, which has since changed the game for this family. This new variety, supplemented with organic farming and adopting scientific techniques, has helped Magan grow around 1.5 kilos worth of guava, and earned him around Rs 20 lakh (USD 27,600) a year so far.

Magan bought the Thai variety from a local nursery, and learned the technique to grow it on YouTube, and with help from some guava farmers in the vicinity. “We kept a gap of 8 feet between two plants and introduced drip irrigation, mulching, and other scientific methods. We made organic fertilizers and compost. In about two years, the plants began yielding fruits,” he says.

He said initially, he grew turmeric and other plants between the guava plantation. “But as the tree grew, the dense canopy didn’t allow enough sunlight to reach the smaller plants, so I shifted focus entirely on growing guava. Initially, the plants bore fruit weighing 350 grams. But they were young, and we feared they wouldn’t be able to bear the heavy load, so we cut them off and didn’t sell them, and allowed the plant to grow more. We waited for another year until the plants matured and enabled better fruiting,” he says.

Once the produce was ready, Magan took it to the market, where, he says, he received an overwhelming response. “The plant is grown using organic methods, so it tasted better as compared to other fruits in the market. The guava is also much softer, and has fewer seeds. The smallest size of the fruit was 350 grams, and the largest was about 1.5 kilos, which stood out in the market,” he says.

Profits soared as traders from neighboring districts such as Ahmedabad, Surat, Vadodara and Navsari began approaching Magan directly to buy the produce.

He says adopting organic methods to grow the fruit posed a challenge. “The soil demands special care, requires adequate irrigation, and even the smallest infestation needs immediate attention. The family devised home remedies like applying neem and tobacco water for minor infections during the growth period,” he says.

Magan says he is glad he made the shift. “Farmers should continuously adopt better ways of farming, and have a good understanding of changing market needs. I’m now planning to prepare and sell jams and jellies made from the fruit. Research is underway and hopefully, a market-ready product will be ready soon,” he says.

He also says that before he began growing this variety of guava, he often didn’t feel like visiting the farm and depended on labor to take care of it. But growing this guava helped him reconnect with his only source of income. “Now I make sure I visit the farm every day,” he says.