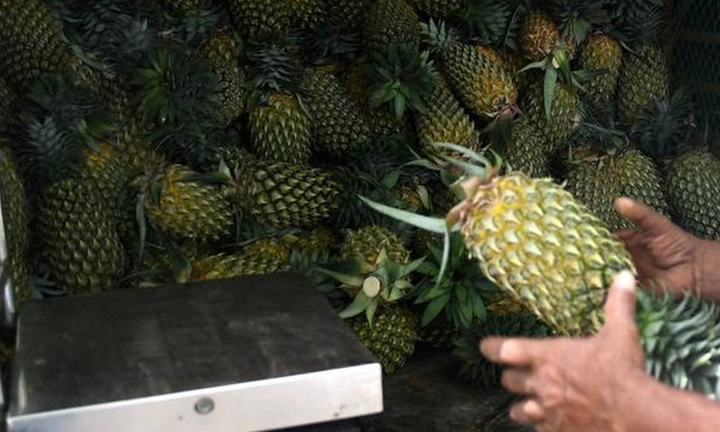 PHOTO: According to pineapple farmers, the availability of the fruit has been steadily rising in recent months. SOURCE: H. Vibhu/The Hindu

Pineapple farmers across the State are possibly looking at around 20% rise in fruit production, even as demand has gone up in north India following the winter season and COVID-19 restrictions.

Farmers, numbering around 5,000, have brought more area under cultivation, as planters opted out of rubber farming in the backdrop of the fall in the price of the crop, said Jose Varghese, a pineapple merchant at Vazhakkulam. He added that the rise in demand from upcountry markets had boosted harvesting too, as farmers are seeing an opportunity to get remunerative prices.

According to him, the raw variety sent to cities outside Kerala are fetching around ₹25 (USD 0.34) a kg. The demand for ripe fruit in the local market is steady, but prices hover around ₹20 (USD 0.28) a kg. Though the price levels are remunerative, farmers had sustained massive losses during the pandemic, and it will be difficult for them to make good for their losses, he said.

Baby John, a pineapple farmer, said with more areas coming under pineapple cultivation, the availability of the fruit had been steadily rising during January, February, and March.

He added that around 1,500 tonnes of the fruit were being exported to cities outside Kerala over the last three months. This is largely because farmers took good care of their gardens during the pandemic. The availability of the fruit at this level is unprecedented, Mr. John said.

Around 150 lorry loads of pineapple are shipped to north Indian cities, including New Delhi and Mumbai. The summer season has seen a rise in demand for fruits, even as the supply of mango and orange has come down, Mr. John said. This is another reason why the demand for pineapple is on an upward spiral.

At the same time, a rise in the price of the fruit will also cause some resistance from buyers, as the pandemic has curtailed income for a large segment of the population.

It is estimated that 18,000 hectares under pineapple cultivation in the State produce around 5.5 lakh tonnes of the fruit on average in a year.