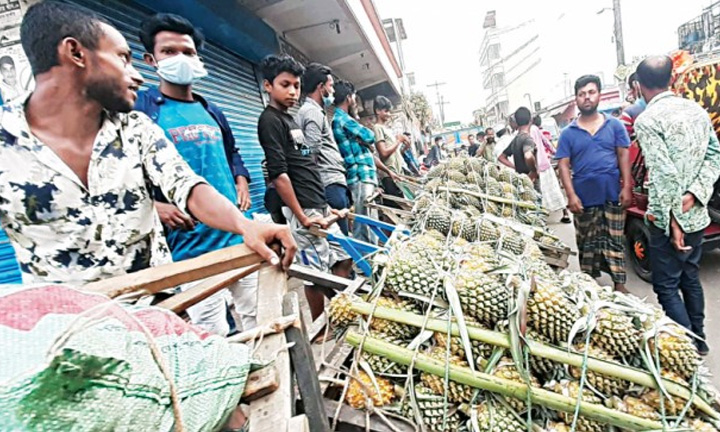 Prices of pineapple are higher this year compared to the previous year due to high demand across the country, including the capital. The photo was taken from Sreemangal upazlia of Moulvibazar recently. SOURCE: Mintu Deshwara, The Daily Star

An intense heatwave is sweeping across the country. The sun’s piercing rays inevitably cause streams of sweat to run off pedestrians.

At this very moment, when sheer exhaustion leads to a desperate attempt at quenching one’s thirst, a nonchalant roadside vendor offers his basketful of one of nature’s simplest delights.

Yes, the season’s saving grace is in the form of the sweet pineapple, to be precise, the popular “honey queen” variety.

Surrounded by a tough segmented skin and topped with a tuft of stiff leaves, this tropical fruit has now turned irresistible.

Scenes of people relishing on the aromatic yellow flesh, carelessly dripping juices all over, are surprisingly very common now on Dhaka streets.

Just as people are quenching their thirst, so has the advanced arrival of this fruit helped bring smiles to farmers during the days of the ongoing pandemic.

Though the peak time for harvest starts from late May or the first week of June, many farmers of Rangamati and Khagrachhari, and some of Moulvibazar have started picking it early to get a good price during Ramadan.

Harvesting has already started in Rangamati on a small scale since the middle of March, said Krishna Prasad Mallik, deputy director of the Department of Agricultural Extension (DAE) in the district.

“We are getting on an average 24 tonnes of the fruit per hectare. This yield is comparatively good in this off-season. It will increase during the peak time,” he said.

Kazi Lutful Bari, deputy director of the DAE in Moulvibazar, said usually harvesting starts there around May and June.

But considering the huge demand for this fruit during Ramadan, some farmers are harvesting a little in advance to get good prices, he added.

This year, the price is a bit higher compared to that last year due to high demand across the country, including the capital, during Ramadan and Covid-19 pandemic.

Vendors on rickshaw-vans in Dhaka city usually sell the smallest ones for Tk 30 (USD 0.35).

However, farmers are selling the fruit at wholesale markets in Rangamati anywhere between Tk 5 to Tk 50 (USD 0.06-0.59) based on the size variations.

Shamsul Haque, owner of a pineapple orchard at Radhanagar in Moulvibazar’s Sreemangal, said the demand for pineapple has increased during Ramadan.

The retail price of four is around Tk 400 (USD 4.72) in the local market, albeit dependent on the size, he added.

Masudur Rahman, a private job holder in Mohammadpur of Dhaka, said he consumes pineapple during ifter every day as the fruit seemingly relieves fatigue and thirst after a whole day of fasting.

Suroj Mia, a security guard in Dhanmondi area, said though the price of pineapple was comparatively high this year, the fruit was still cheaper compared to other fruits in the market. “Therefore, I often buy pineapple for iftar,” he said.

“I can’t fast as I pull rickshaw all day. But in this intense heat, I eat pineapple usually to deal with my fatigue and quench my thirst,” said rickshaw puller Ramjan Ali who was thronging with some others at a mobile shop on a rickshaw-van in Raja Bazar area recently.

Alongside Ramadan, the demand for pineapple is high during the Covid-19 pandemic as this fruit is considered a good option for dealing with colds and fevers, as it contains vitamins C, A, B6, E, and K, calcium, folate, iron and zinc, which help the immune system keep healthy.

Even before the season, the pineapples on the market are very sweet and tasty, said many customers.

DAE Deputy Commissioner Krishna Prasad Mallik said most of the pineapples available in the market are of the “honey queen” variety. “It is very sweet and good in shape. It is recognised as the best of all varieties,” he said.

This year, the “honey queen” variety has been cultivated in 90 per cent of the 2,130 hectares of land dedicated for pineapples in different areas, including Naniarchar upazila of Rangamati.

The “honey queen” variety originated in Naniarchar area. Farmers of Islampur and Bogartekh areas in the upazila have been cultivating the variety since long, he added.

However, according to the DAE district offices, there has been a bumper production of pineapple in different districts, especially in Tangail, Moulvibazar, Rangamati and Khagrachhari this season because of favourable weather conditions.

This year, about 11,058 hectares of land have been brought under pineapple farming in Tangail, Rangamati, Khagrachhari and Bandarban. About 6,500 hectares of the fruit has been cultivated only in Tangail, according to agriculture officials.

Pineapple was cultivated in 19,706 hectares of land and 4,74,240 metric tonnes of the fruit was harvested across the country last year, said Sabina Yesmin, upazila agriculture officer at the DAE.

The DAE officials said nationwide pineapple yields are usually calculated each year after the end of the harvest period.

This year, the yield of the fruit will be more than that of last year as cultivation has been expanded, they said.

“We are expecting a bumper yield this year. But due to a lack of rain, the pineapples may be comparatively smaller in size. But, if it rains, it will be fine enough,” said Pranab Kanti Barua, deputy director of the DAE in Khagrachhari.

Our correspondents from Tangail, Moulvibazar and Rangamati contributed to the report.