INDIA: In Karnataka, a silent revolution with bananas 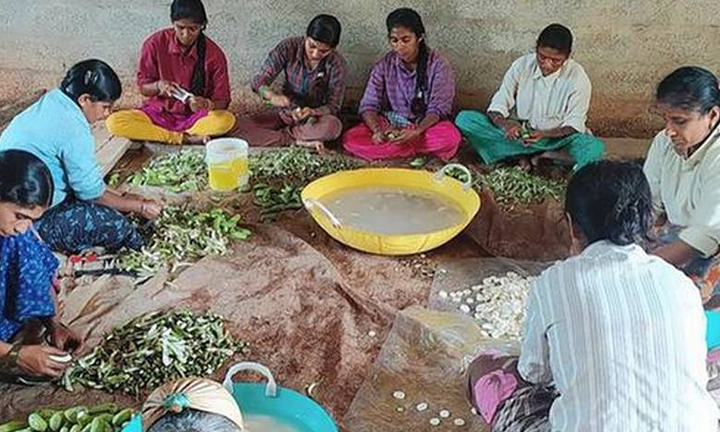 PHOTO: Food revolution: Farmers are making use of banana flour to prepare dishes from dosas to gulab jamun. SOURCE: The Hindu

Farming communities in Uttara Kannada and Dakshina Kannada in Karnataka are demonstrating that much more than banana bread — the flavor of the first year of lockdown — can be made with the fruit.

In rain-rich Karnataka, banana cultivation is common but farmers have no control over prices. “Merchants categories the fruit into first and second quality. It was being bought at ₹4 and ₹5 per kg during the lockdown. The farmers were forced to take back the seconds. When there is a glut, distress sales are common in this region,” says farm educator Shree Padre.

Now, homemakers are helping these farmers by experimenting with banana flour, which can be used for everything from dosas to gulab jamun.

Nayana Anand from Tumkur, Karnataka, turned a bunch of plantain into sweets and savories for a week, posting pictures of her experiments and, thus, creating a buzz in Any Time Vegetable (ATV), a WhatsApp group composed predominantly of farmers in Uttara Kannada, Karnataka.

“The reason for the excitement was because she had cooked most of the dishes with banana flour, which was made by drying local varieties grown in the region,” says Mr. Padre.

The lockdowns forced farmers to feed their crop to cattle or sell it for rock bottom prices. Sharing the crop with neighbors or relatives is ruled out as they are also into banana cultivation. Although, many farmers dry the ripe fruit to make banana fig, during the monsoon that too comes to a standstill and tonnes of fresh fruit have to be discarded.

Baby food
Then, this March, Ms. Anand saw a post by Jayambika Rajan from Haripad, Kerala, who was making and selling banana flour made of the Nendran variety. She had turned entrepreneur with the help of an incubation centre at the Krishi Vigyan Kendra (KVK), Alappuzha. A common ingredient of baby food in Kerala, banana flour is sold as a branded product by private players and Kudumbashree units.

Ms. Anand contacted Mr. Padre and requested him to help her make the flour. He put her in touch with Jissy George, Subject Matter Specialist at KVK, Alappuzha.

Ms. George asserts that it is easy to process raw banana of any variety into flour, and no fancy equipment or heavy investment is required. All one needs is a drier.

Sensing that this would be of immense help to farmers, Mr. Padre requested Ms. Anand to explain how to make the flour, and she posted an explainer on his WhatsApp groups, sending it to farming groups across Uttara Kannada. “As the monsoon had set in, I hoped at least a few farmers would take it up there. This district probably has the highest number of food grade driers, [about 1,500-plus] in Karnataka and so it would be easy for them to make the flour,” says Mr. Padre.

To his delight, septuagenarian Subraya Hegde from Ooruthota took the initiative to make banana flour, using it for roti, thalipeeth and several snacks. As he shared his success on social media, it sparked interest among farmers. In the meantime, Mr. Padre got in touch with the Central Processing facility at Kotegadde, near Thirthahalli, established by the Vanilla Growers’ Association. He persuaded them to process banana flour and 50 kg, made from local varieties, were distributed to homes. Families across Thirthahalli took up the challenge and unleashed a culinary fiesta with banana flour, which Mr. Padre calls ‘Ba Ka Hu’.

News of the revolution reached the National Research Centre for Banana at Tiruchi in Tamil Nadu and its director Uma Subbaraya sent a congratulatory message to Ms. Anand. “A silent revolution is taking place in Karnataka, thanks to a bunch of enterprising women,” Ms. Uma Subbaraya said.