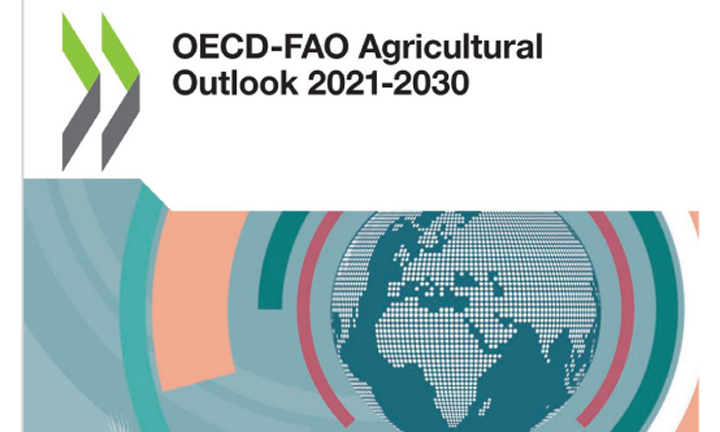 Every now and then, it’s a good idea to step back and look at the proverbial Big Picture.

The recently released OECD-FAO Agricultural Outlook, which covers the present to 2030, provides that opportunity. (OECD = Organisation for Economic Co-operation and Development; FAO = Food and Agricultural Organization of the United Nations).

Most of the 337-page report deals with commodities other than produce, such as cereals, oilseeds, meat, sugar, and cotton. But fruits and vegetables receive some treatment in section 11, dedicated to “Other Crops.”

The report gives particular attention to bananas and the four other major tropical fruits: mango, pineapple, avocado, and papaya.

“Export quantities of the four major tropical fresh fruits have experienced some of the fastest annual growth among internationally traded food commodities, while export quantities of bananas have increased to unprecedented heights,” we are told.

“The outlook . . . indicates that bananas and major tropical fruits would continue to be among the fastest growing and most valuable agricultural industries in terms of their international trade prospects. . . . Preliminary estimates indicate that global exports of bananas, excluding plantains, reached a new record high of 22.2 Mt in 2020, an increase of 1.7% compared to 2019.”

As for the future, “assuming normal conditions and no further spread of banana plant diseases,” growth in banana output is expected to grow at an annual rate of 1.4 percent to 2030.

Those assumptions put these estimates in some question, because the report also points out the danger of spreading Tropical Race 4 (TR4) Fusarium wilt—a major threat to bananas worldwide. “TR4 is currently confirmed in 23 countries, predominantly in South and Southeast Asia, but also in the Middle East and Latin America, with Colombia reporting the first infection in August 2019 and Peru in April 2021.”

Avocados are perhaps the brightest spot in the picture. “Avocado has the lowest production level among the major tropical fruits but has experienced the fastest growth in recent years and is expected to remain the fastest growing commodity of the major tropical fruits over the outlook period. Production is accordingly projected to reach 12 Mt by 2030—more than three times its level in 2010.”

Avocado production in Mexico is expected to increase by 5.2 percent over the next years, largely in response to demand from the U.S., and is expected to further increase its share of global exports, to 63% in 2030.

The U.S. and the European Union will remain the principal importers, with 40 percent and 31 percent of global imports respectively.

Projections of this kind are, of course, for the most part extensions of current trends—and current trends never continue. The report concludes with a short section on “uncertainties.”

For example, “the effects of global warming are resulting in a higher occurrence of droughts, floods, hurricanes and other natural disasters, which render the production of bananas and other tropical fruits increasingly difficult and costly.”

Nevertheless, the outlook is optimistic. “Despite these uncertainties, global production and trade of bananas and major tropical fruits are projected to expand solidly over the medium term.”

Causes include “demand growth in high-income countries, where nutritional awareness is becoming stronger, and increasing demand also in emerging countries such as China and India.”