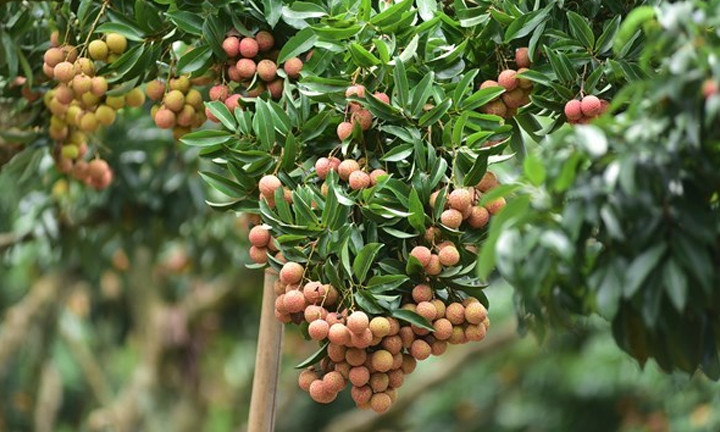 When the lychee harvest time of 2021 came, Bac Giang was still a COVID-19 epicentre with thousands of infection cases. Striving to concurrently fight against the pandemic and promote lychee sale, this northern province took flexible and creative measures to secure a successful crop.

A lychee crop with two records

The 2021 lychee crop of Bac Giang was said to have the best quality and the largest output compared to previous years. Total lychee output exceeded 215,800 tonnes, rising by over 50,000 tonnes from 2020.

The local lychee had found their way into almost all supermarket networks across Vietnam such as Big C, Saigon Co.opmart, Hapro, Aeon, Lotte, and Vinmart, as well as shopping malls, convenience stores, wholesale markets, and traditional markets.

In particular, the fruit was sold on social networks like Facebook, Zalo, and Youtube, along with large domestic and international e-commerce platforms, including Voso, Sendo, Tiki, Shopee, Lazada, Postmart, and Alibaba with a record volume – more than 6,000 tonnes.

The province enjoyed stable lychee export this year. The local fruit speciality has gained a foothold in many countries and territories around the world. The export volume reached 89,300 tonnes, accounting for 41.4 percent of the total sold figure.

Apart from the traditional and largest market of China, the lychee was also shipped to the EU, the US, Australia, Japan, the Republic of Korea, Southeast Asia, and the Middle East.

Despite certain disadvantages caused by the COVID-19 pandemic, this year’s lychee prices stayed stable throughout the crop, comparable to or even higher than prices in the pre-pandemic period.

Bac Giang earned over 6.8 trillion VND (299.6 million USD) in lychee sales and revenue of support services, including 4.27 trillion VND in sales. Selling prices averaged 19,800 VND per kg in the domestic market during the crop.

The fruit has won over high evaluation from consumers in demanding markets such as Japan, the US, the Netherlands, Belgium, France, Germany, China, and some countries in the Middle East and Southeast Asia. Export prices were also high, ranging between 30,000 VND and 55,000 VND per kg.

From the start of the crop, the provincial People’s Committee issued a plan on the organisation of promotion activities to boost lychee sale.

Partners such as Aeon, Central Group, Mega Market, and Big C sent their representatives to work with Bac Giang businesses to make preparations ahead of the harvest time. More than 50 contracts were signed, involving a lychee volume much higher than in previous years.

In May 2021, the provincial Department of Industry and Trade coordinated with the Tan Yen district People’s Committee to hold a ceremony marking the first batch of lychee destined for Japan.

Although Bac Giang was still an epicentre of COVID-19 in early June, its People’s Committee worked with the Ministry of Industry and Trade, the Ministry of Agriculture and Rural Development, ministries, and central agencies to successfully organise a teleconference promoting the sale of lychee. The event attracted participants from across Vietnam and China, Japan, Singapore, and Australia via videoconference.

At that meeting, the Bac Giang lychee officially made debut on major e-commerce platforms of Vietnam and the world.

In addition, the Department of Industry and Trade kept cooperation with relevant agencies of the trade and agriculture ministries to take part in online meetings and discussions to connect with businesses and importers in Japan, Australia, the EU, and China, among others.

Proposals were submitted to the Government, the Prime Minister, ministries, sectors, and other localities to seek the best possible conditions for the transportation of lychee in the domestic market and to foreign destinations.

Vice Chairman of the provincial People’s Committee Phan The Tuan said thanks to the proactive, drastic, and creative actions, as well as the involvement of the entire political system, Bac Giang obtained a successful lychee crop amid the trying time.