After 10 years of negotiations, Vietnamese mangoes have officially been licensed to enter the US market. Accordingly, local mango co-operatives in the Southern province of Vinh Long signed deals with Hanoi-based Greeen Path Trading and Import Export JSC to export mango to the US market. This is the sixth fruit of Vietnam allowed to approach this market.

Local mango farmers in Vung Liem district, Vinh Long province, are all content to learn that the Vinh Long authorities have signed contracts to export mangoes to the US.

Tran Van Dang, director of the Quoi An Mango Co-operative in Hiep Truong hamlet, Quoi An commune, Vung Liem district, said that his family has 18,000m2 of mango trees with a revenue of VND500-600 million (USD 21,500-USD 25,800) per year. He noted that the vitality of these mango trees is enormous. Many mango trees in his garden fell due to storms but they survived and continued to produce fruit after his efforts to raise the trees.

Despite the erratic weather, productivity remains quite high thanks to the correct practice of farming technique, Dang said. In addition, thanks to the intercropping of golden cane palm (Dypsis lutescens), Dang can earn an additional VND15-20 million (USD 860) per month, which can help his family to cover the living expenses and fertiliser costs for the mango garden.

Nguyen Van Kiet’s family is also one of the known mango garden owners in Quoi An commune who have planted 8,000m2 of mango trees, earning over VND300 million (USD 12,900) per year. Kiet said that if local mangoes are allowed to be exported to the US, the prices will be much higher, helping mango farmers to increase their income and improve their lives. 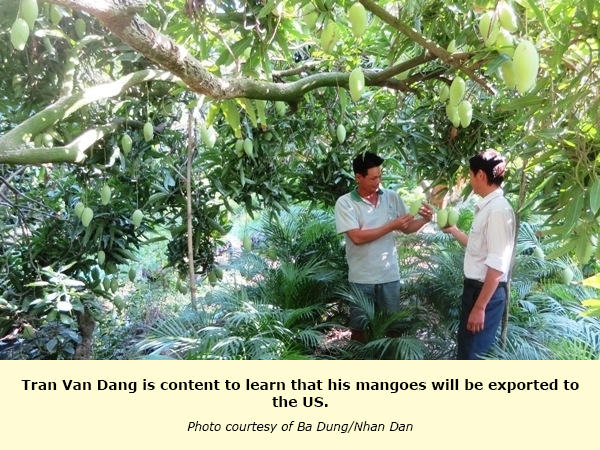 In a bid to restructure agricultural production, Vung Liem district has coordinated with the provincial agricultural sector to implement a number of policies to support farmers towards sustainable production. Notably, farmers are assisted in building fruit production models with the application of science and technology to improve productivity, quality and economic efficiency.

Mango farming is one of the key crops that the district is encouraging its farmers to grow. So far, local farmers have cultivated 1,078 ha of mangoes including 47ha certified to meet VietGAP standards which is run by the Quoi An-Trung Chanh Mango Cooperative.

To create favourable conditions for the distribution of high quality agricultural products, the authority of Vung Liem district has organised promotion activities and participated in trade fairs to introduce the distinguished products of the locality while connecting enterprises in the areas. Meanwhile, the district has built and received recognised brand of Vung Liem mangoes.

According to the Vinh Long provincial Department of Agriculture and Rural Development, the province possesses nearly 4,900 ha of mango trees, accounting for 11% of the total area of fruit trees, of which more than 93 ha of mango trees have obtained VietGAP certification. The province has also built and granted regional codes for farming areas of mangoes, rambutans, longans and grapefruits that are qualified for export.

Dr. Huynh Kim Dinh, director of the Vinh Long Crop Production and Plant Protection Department said: “Vinh Long province has huge potential for the export of fruits. In the past years, fruits such as longans, rambutans, mangoes, and grapefruits have been shipped to the US, the Republic of Korea, Europe, the Netherlands and Russia by enterprises outside the province. Vinh Long has recently signed contracts to export mangoes to the US which is positive news for the local authorities and mango farmers as the province has nearly 5,000ha of mangoes and farmers have become familiar with the cultivation following VietGAP standards and biosafety methods.”

Longan is also one of the potential export products to fastidious foreign markets with a farming area of over 7,000 ha, leading the Mekong Delta region in terms of farming areas, Dinh noted.

Dinh added that many types of fruits of Vinh Long have been exported, but most of them are conducted by companies outside the province. Currently, some local companies have asked Vinh Long provincial People’s Committee to allow them to invest in self-contained production lines including the distribution and export of fruits. Many local enterprises have also processed fruits in different ways such as freezing, drying, canning and other methods to create more value for products and to suit new export markets, Dinh added.

According to Nguyen Van Liem, deputy director of the Department of Agriculture and Rural Development of Vinh Long province, the penetration of the local fruit into the US market shows that Vinh Long’s agricultural products have achieved many set standards and have been recognised for their quality and brands. Bringing mangoes into a demanding market is also a good sign for Vinh Long’s farm produce, requiring farmers to raise their awareness of safe and sustainable production and strictly following their commitments to enterprises. The export of mangoes will be a premise to expand exports of other agricultural products in the locality, Liem said.