Bananas from southeastern Mexico will soon be on their way to Chinese consumers after the signing of a bilateral agreement.

A process that began with the previous federal government concluded with the signing of a phytosanitary protocol by Agriculture and Rural Development Secretary Víctor Villalobos Arámbula and Chinese official Zhang Jiwen. 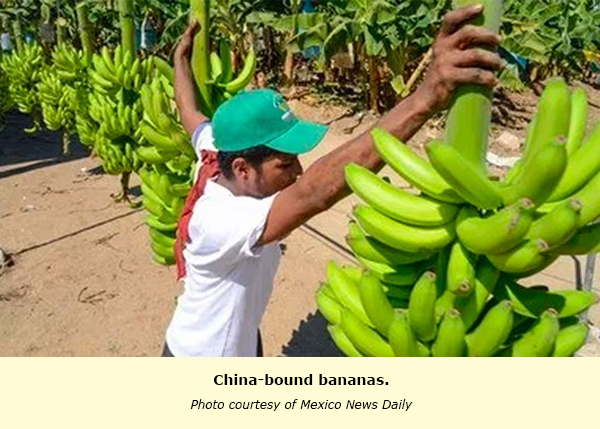 Speaking in Beijing, Villalobos explained that the new deal will benefit producers in the states of Chiapas, Tabasco and Veracruz, where 30%, 27% and 10% of the country’s bananas are harvested respectively.

In order to benefit from the new export opportunity, producers must sign up as exporters and comply with China’s phytosanitary requirements.

The first certificates allowing Mexican banana producers to export their produce to China could be issued before the end of the year, Villalobos explained.

Official figures show that bananas are harvested in 16 states where they are grown on more than 80,000 hectares. The annual yield is just under 2.2 million tonnes and worth close to 7 billion pesos (USD 365.6 million).

Mexico was the world’s 12th largest banana producer in 2017, contributing 2% of the global total.