INDONESIA: Indonesian tropical fruits can now be exported to Argentina

Indonesia has received the green light from the Argentinian government to export its tropical fruits such as mango, banana and mangosteen to the country as part of the two countries’ commitment to double their two-way trade value within the next three years. 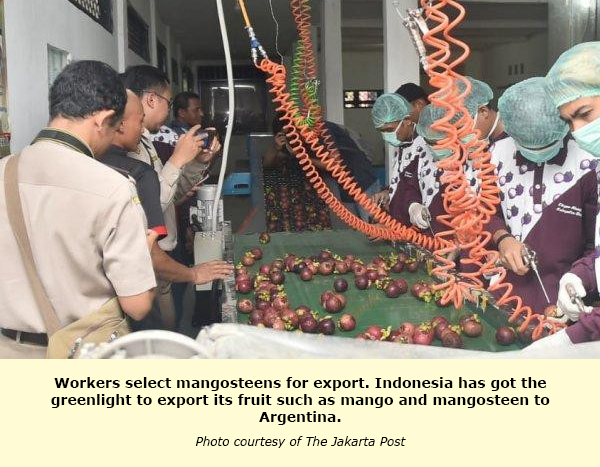 The Argentinian promise to import Indonesia’s fruits was disclosed by Argentinian President Mauricio Macri when he received Indonesia’s Agriculture Minister Amran Sulaiman at the Presidential Palace in Buenos Aires on Monday.

During the meeting, President Macri also promised to increase the quota of Argentina’s palm oil imports from Indonesia, kompas.com reported on Wednesday.

Minister Amran visited the Latin American country as a follow-up to the meeting between President Joko “Jokowi’ Widodo and President Macri at Bogor Palace in June. During the meeting, the two leaders agreed to further boost the two countries’ economic cooperation.

In addition to fruits and CPO, Indonesia also has an excellent opportunity to export garments, shoes and automotive parts to Argentina.

During his visit to Argentina in May this year Trade Minister Enggartiasto Lukita and Argentinian Minister of Production and Labor Dante Enrique Sica agreed to double the two-way trade by 2021 from about USD 1.7 billion in 2018.