The rising popularity of foods which rely on pollinating insects to grow – such as citrus fruits, avocados and soybeans – are a threat to global food security, experts have warned. 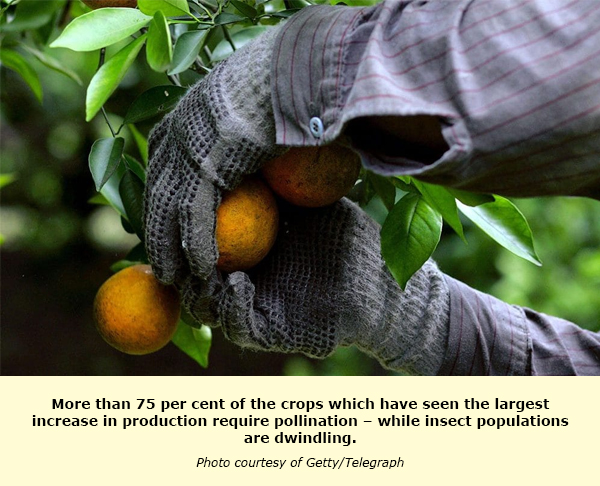 Over the last 40 years crop diversity has been in decline, as farmers have prioritized growing the most sought-after foods, such as soybeans and palm oil.

But more than 75 per cent of the crops which have seen the largest increase in production require pollination – while insect populations are dwindling.

Harmful farming practices are largely to blame; a lack of crop diversity means flowers are in bloom for a limited window of time, reducing opportunities for insects to gain nutrition and having a knock on effect on food security.

Climate change and conflict are already causing widespread hunger across the globe, with 821 million people undernourished in 2017, but farming practices harmful to biodiversity could exacerbate this trend.

“Farmers are growing more crops that require pollination, such as fruits, nuts and oil seeds, because there’s an increasing demand for them and they have a higher market value,” said David Inouye, professor of biology at the University of Maryland and co-author of the research published in Global Change Biology.

“This study points out that these current trends are not great for pollinators, and countries that diversify their agricultural crops are going to benefit more than those that expand with only a limited subset of crops,” he added.

But while the drive to sustain Western appetites can be fatal for the very pollinating insects needed to maintain crop security, the developing world is left most vulnerable.

According to the study, Brazil, Paraguay, Bolivia and Argentina are the most at risk of agricultural instability, largely due to soybean production.

Deforestation has replaced rich biodiversity with single-crop agriculture which does little to support a healthy insect population, despite the crop requiring pollination to produce the soybean fruit.

In Indonesia and Malaysia there’s a similar story due to the widespread expansion of palm oil farming.

“Emerging and developing countries in South America, Africa and Asia are most affected,” said Professor Marcelo Aizen from the of the National Council for Scientific and Technological Research in Argentina.

“Soy production has risen by around 30 per cent per decade globally,” he added. “This is problematic because numerous natural and semi-natural habitats, including tropical and subtropical forests and meadows, have been destroyed for soy fields.”

But developed countries are not immune – the consequences of a poor harvest would have global repercussions.

Europe is also seeing pollinator-dependent crops such as wheat and rice increasingly grown, despite reductions in lang dedicated to farming, while agricultural diversity in the US has not kept up with the dramatic expansion of intensive soybean farming.

“The bottom line is that if you’re increasing pollinator crops, you also need to diversify crops and implement pollinator-friendly management,” said Mr Inouye. “This work should sound an alarm for policymakers.”