U.S. Customs and Border Protection agriculture specialists at Laredo Port of Entry discovered two significant rare pests and another was confirmed as a first time find in the nation during the month of June. 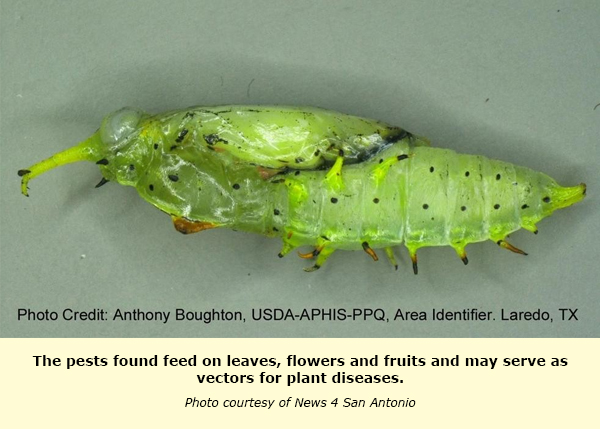 Agriculture specialists at the World Trade Bridge import lot June 5 found a squash bug from a sample of tweedia flowers. Three days later specialists found a butterfly within a shipment of papaya. The papaya shipment was denied entry and returned to Mexico.

Both insects were considered quarantine significant because both pests are plant feeders and are not known to occur in the United States. These incidents mark the first time these pests have been intercepted at the port of Laredo.

Authorities determined a pest found in February was a first for the entire country. A butterfly pupa was found while inspecting sample bundles of cut palm. The specimen was taken to officials for identification.

“The discovery of three significant pests, including a confirmed first in nation interception, underscores the meticulous work of our frontline CBP agriculture specialists in the cargo environment and the importance of that work,” said Port Director Albert Flores, Laredo Port of Entry. “These notable interceptions are instrumental in protecting American agriculture from serious economic harm that can be inflicted by infiltration of pest species not known to exist in the U.S.

Officials said pests not common in the United States may be “detrimental to the nation’s agriculture industry.” These pests feed on leaves, flowers and fruits and may serve as vectors for plant diseases.