KENYA: Watch out for these two mango diseases

It is another mango season and as expected, markets are flooded with the fruits, with a majority going for a song. But as some farmers enjoy the boom, last week I visited a mango farmer in Makueni who feared losing his fruits because of increased disease infestation.

Diseases often lead to lower quantity and quality of fruits, resulting in low profits. In instances where pest and disease infestation are not controlled, post-harvest losses are high. One of the diseases currently ravaging the mango tree is bacterial black spot, which affects leaves, stems and the fruits. On leaves, the disease causes black angular greasy spots between the veins, which sometimes have yellow holes. 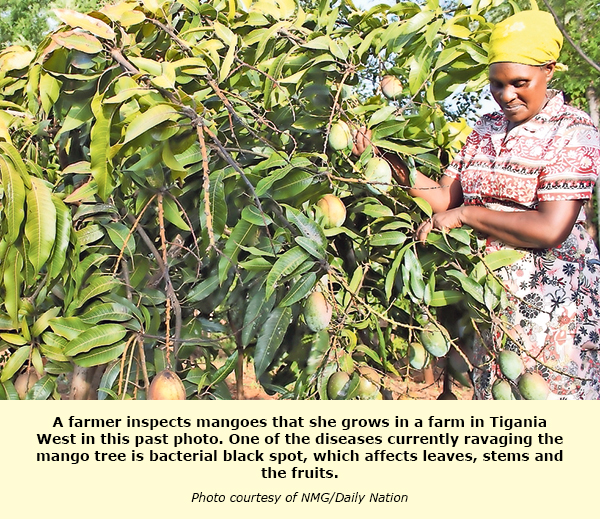 With time, these spots enlarge and destroy large areas of the leaves, which turn grey and crack, leading to reduction of photosynthetic area and high rate of leaf fall. Affected fruits have black oval to irregular raised spots, which develop with greasy margins.

The spots are usually skin deep, but they affect the quality of the mango fruits, leading to rejection or lower selling price. The flowers, leaf stalk and stems are also attacked, with the affected parts developing cankers, which lead to shoot tip dieback.

The disease is easily spread by windblown rain, splash water and insects. Injuries or abrasion on the plant form the entry point for the micro-organism. Affected seedlings can also spread the disease from one region to the other. The disease can be severe in both high and low rainfall areas as dew also increases its spread.

During crop establishment, take preventive measures that include buying clean planting materials to curb introduction of the disease on the farm. It is also ideal to select varieties that are resistant and tolerant to the disease.

Nurseries for raising the rootstock or the grafted trees should be away from the mango plantation to prevent contamination of the young seedlings. During nursery establishment, one should select a nursery site that is protected from wind and establish windbreakers.

Overhead irrigation, which entails the use of sprinklers and rain guns, should be avoided as this helps in the spread of the disease. In dry areas, drip irrigation should be used. Pruning should be done to avoid overcrowded leaves, as this makes it hard to spray. All the pruning shears should be sterilised after pruning each tree.

Besides bacterial black spot, the other disease affecting mangoes is powdery mildew, which is caused by fungi. It attacks the inflorescences, leaves and young fruits. The leaves appear whitish, and the affected flowers fail to open, resulting in flower abortion. Sometimes the young fruits are also affected, which makes them fall prematurely. This disease can result in severe losses due to poor fruit set and dense flower abortion.

The disease-causing agent survives from one season to the other as mycelium in the dormant buds and as haustoria on tender leaves. The wind also spreads the disease from one mango tree to the other or from one canopy to the other. This is usually common during the cool and dry conditions. The fungi survives in dense foliage during the off season, hence the need to prune affected leaves.

One should maintain field hygiene as the fungus can survive from one season to the other over the plant’s debris. Weeding should also be well done. While carrying out management practices, ensure that there are minimal movements from infected to uninfected areas. To further avoid post-harvest losses, start looking for market early as this will ensure you don’t grapple with storage challenges.