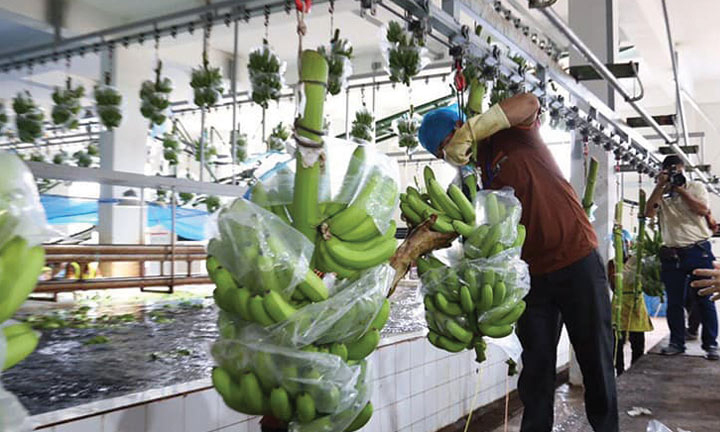 Fresh bananas are still being exported to the Chinese market. However, fresh mangoes to the South Korean market have been badly hit by the Noval Coronavirus effect on fresh fruit markets.

Longmate Agriculture, one of the local companies allowed to export bananas directly to China, reports still being able to send the fresh fruit directly, according to Hun Lak, the company director.

“We still export our fresh bananas to the market as usual, via shipment,” he said.

However, Hun noted his company did not meet the goal of shipping 22,000 tonnes of the fruit last year. Confirming that it was a bit lower than that expected largely because of weather conditions that slightly limited the yield.

Honng Anh Gia Lai Agrico (HAGL Agrico), a Vietnamese conglomerate, has planted a variety of fruits including bananas in Cambodia’s Ratanakiri province. It began shipping the fruit to the Chinese market in late December and also stated the company’s banana shipment is still doing well despite ongoing fears.

“Our banana shipments haven’t been affected by the Novel Coronavirus so far. We are still shipping the fruit to the Chinese market every day,” Nguyen Thi Ha Thuy, investment manager for HGAL in Cambodia, told Khmer Times yesterday.

HAGL Agrico sends its bananas to China through its subsidiaries. Together, the companies have 10 packing facilities that can produce up to 25,000 tonnes of fresh bananas per year. She said, in addition to China, the company also exports the fruit to Japan, Korea and Vietnam.

“We have had big damage because of this virus. It is seriously affecting Cambodia mango exporters,” Chang-Hoon Lee, managing director of Hyundai Agro, confirmed to Khmer Times yesterday, noting that the outbreak has pushed mango price down in the international market. “The main reason for the price drop is simply that people aren’t buying the fresh fruit because they do not want to go outside to shop.” According to Lee, all fruit exports have dropped from between 30 to 50 percent. He said: “Thailand used to send a lot of fruit to China, but their mangoes cannot sell now in the market.” He added that the Thai government has provided support with some subsidiaries to exporters, such as reducing tax tariffs and processing fees.

“Cambodian A grade mangoes can now only sell from between 1,200 to 1,500 riels per kilo, while C grade are selling at around 450 riels per kilo. This is the same price we bought the fruit from farmers for, hence there is no profit to be made,” he said.

In Chayvan, president of the Kampong Speu Mango Association, told Khmer Times yesterday that the prices for both fresh yellow mangoes and processed mango have declined as the result of the virus.

However, he said that processed mangoes ebeing xported to neighbouring countries Vietnam and Thailand are still going well.

“Cambodian yellow mango exports to China through Vietnam and Thailand cannot enter the market because of the virus. The mango market is mostly determined by the Chinese market, where there is a large demand. But now the market is temporarily closed. This has resulted in a large price drop and is causing some exporters to divert the fruit to other markets in Asia and in Europe,” he said. “This situation is concerning for me if the virus persists for much longer because it will start to directly affect the farmers. At the same time, I also worry about merchants taking this opportunity to reduce prices and hurting the farmers livelihoods,” In added.