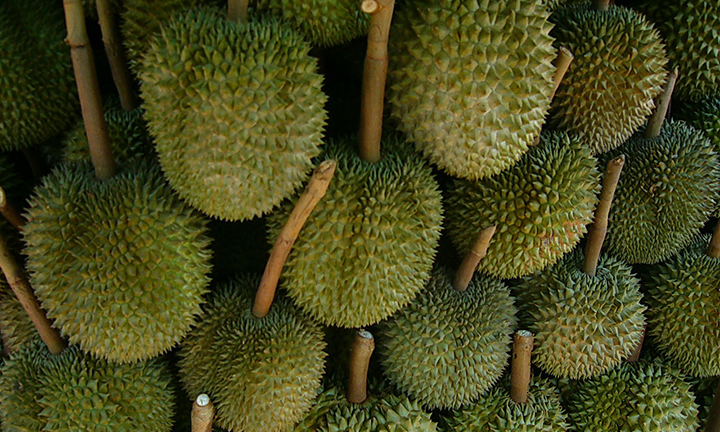 The prices of durians in Malaysia have dipped over the last fortnight as demand from China fell following the novel coronavirus outbreak.

Malaysian farmers who export durians to China, told CNA on Thursday (Feb 6) that disruptions to China’s logistics industry, city lockdowns and changes in consumer tastes due to the outbreak have slowed orders.

Mr Andy Tan, a durian farmer in Segamat, Johor, who exports whole fruits and frozen durian paste to Beijing, Shanghai, Guangzhou and Qingdao, said prices of his durians have dropped by at least 50 per cent.

“Orders have dropped to almost zero over the last two weeks because many Chinese cities are put under lockdown.

“The logistics industry to transport durians have less manpower, and there are major delays to get the products through customs,” he said.

In view of the situation, Mr Tan has stalled processing more products.

He currently has some excess durians in his farm and is looking to sell them locally or export them to Singapore.

“Many farmers have durians and are looking for other ways to sell. We were expecting rising durian demand from China but that has now changed,” he said.

“That’s the nature of durian business, prices are volatile. We have to react quickly to sell our excess durians at lower prices,” he added.

The thorny fruits are an important agricultural export for Malaysia, with the total durian export accounting for 6.8 per cent of the durian production in the country.

Malaysia began exporting frozen durian pulp – in vacuum pack, with husk removed – to China in May 2011.

In May last year, China officially permitted the import of frozen whole durians from Malaysia, in a move that accelerated the expansion of durian farms and increased investment in the industry.

However, the coronavirus has now unexpectedly affected the durian industry, as the outbreak claimed the lives of more than 600 people and infected more than 30,000 people in China as of Friday.

Durian expert Lim Chin Khee said the prices of the highest grade Musang King variant has dropped from RM60 (US$14.50) to RM30 per kg in Raub, Pahang.

Mr Lim, who owns a small durian plantation in Raub for research and development purposes, stressed that the Chinese government has not halted imports of durians but that the novel coronavirus outbreak has slowed down the process of transporting products across the Chinese border.

“Many of the farmers in Raub and other parts of Malaysia have stopped processing durians to China because they don’t want to take risks,” he said.

“What if the virus situation gets worse? We will have a lot of unwanted durians in cold storage,” Mr Lim added, referring to how durians exported to China are stored in liquid nitrogen freezers.

He added that Chinese companies were also importing less because locals in mainland China have “no mood to eat” durians given widespread anxiety over the virus.

Mr Lim said: “Durians are a luxury food, and are best enjoyed in happier times. Maybe now is not the best time to eat durians together in big groups.”

Besides export, durian tourism has also been negatively impacted by the virus.

Mr John Kung, who operates a durian farm at the base of Bukit Fraser that hosts tourists for durian buffets and tours, told CNA that his farm has seen a 75 per cent fall in the number of visitors since Chinese New Year.

Last week, the Malaysia government temporarily suspended granting of visas for all residents from China’s Hubei province, including its capital Wuhan where the virus originated.

The temporary ban was extended to all Chinese provinces placed under lockdown on Thursday.

Sabah and Sarawak have also suspended all scheduled and chartered flights from China to curb the outbreak.

“Most of our visitors are Chinese tour groups anyway, so we might as well close shop until the virus stops spreading,” Mr Kung said.

However, Ms Melissa Yap, the chairman of Pahang’s fruit farmers’ association, said she is optimistic that the virus will soon be controlled, and China’s appetite for durians will be restored.

“The peak season for durian is from April to August, so hopefully by then the virus would have been controlled,” said Ms Yap.

“Yes, now durian tourism is down and there are logistical problems to import to China, but we know the Chinese people still love durians,” she added.

Ms Yap also pointed out that durians can now be stored in liquid nitrogen freezers for up to two years to maintain their freshness.

Hence, the short term fall in demand should not impact farmers too much, she said.