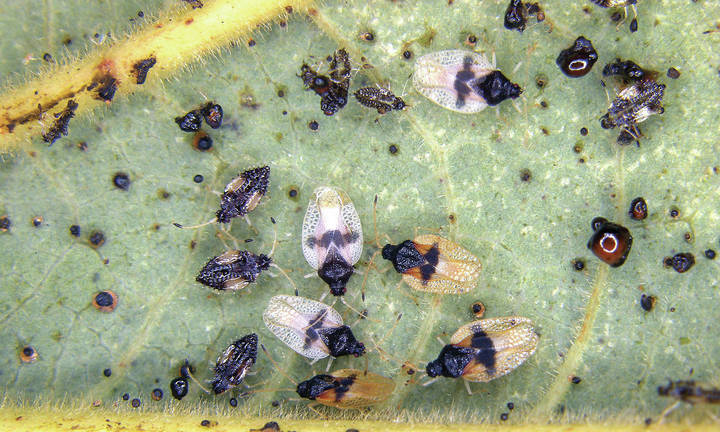 Another invasive pest has been identified on Hawaii Island, this time threatening avocado trees.

Avocado lace bug (Pseudacysta perseae) was first detected in Pearl City, Oahu, in December 2019 and was subsequently identified on Hawaii Island and in plants infested at retail outlets on Maui — the plants were destroyed or treated, the state Department of Agriculture announced Thursday afternoon.

Michael Krones, owner of Avoland Hawaii Farms in South Kona, said Friday he knew about the bug on Oahu, but was unaware it had spread to the Big Island.

“I need to start looking at my trees and do some more research,” he said.

The avocado lace bug feeds on the leaves of avocado plants and extracts nutrients from foliage, sucking the life out of it and causing gradual destruction of the leaves, according to the Department of Agriculture, which confirmed the pest’s presence with the help of the University of Hawaii College of Tropical Agriculture and Human Resources.

The lace bug does not feed on the fruit itself, rather it causes green to yellowish blotches on the leaves, according to the department. Uncontrolled, leaves become dry, may curl, drop prematurely and may cause reduction in fruit yields.

The avocado lace bug was described in Florida in the early 1900s and has spread through the southeastern U.S. and into California. It is also found in the Caribbean, Central and South America, and Portugal.

It has not been determined how the lace bug was introduced in Hawaii, according to agriculture officials.

“It’s only a matter of time before it gets to the west side,” he said. “It is potentially extremely devastating.”

Love said the state needs to do more to quell the introduction and spread of potentially disastrous invasive species.

“We’ve been focusing on what can’t go to California,” said Love referencing the embargo of Hawaii avocados to that state. “We need to place more focus on what’s coming in here,” cautioning of such pests as the laurel wilt fungus, not found in Hawaii, that has decimated Florida’s avocado farms.

Further the 0.4% of the state budget allocated to the Department of Agriculture is not enough.

“That’s insulting to the farmers,” said Love, who is advocating at the state level for more thorough inspections to keep invasive species — like the avocado lace bug — from reaching Hawaii.

Hawaii avocado production was estimated at 17.4 million pounds for the 2018-19 season, up 12% from the previous season, according to data compiled in January by the Department of Agriculture. The increase was attributed to a record 840 acres harvested in 2018-19. The value of the crop was estimated at nearly $1.6 million.

Hawaii is the third largest producer of avocado in the United States, according to the department. More than 200 varieties of avocado are grown across the state, including the Sharwil variety, which is typically grown for commercial production and exported out of state.

Adult lace bugs are about 2 millimeters long with a black head and mostly black body and a black stripe across the width of its lacy wings. Immature avocado lace bugs can range in color from reddish to dark brown to black, depending on life stage. The eggs are black and look like specks of excrement and may be found in clusters on the undersides of the leaves.

Researchers at the University of Florida have shown that citrus oil, and M-Pede (an insecticidal soap) provided short-term lace bug control, according to a press release from the department. Results of small tree trials or weathered residue tests have indicated that carbaryl, imidicloprid, cyfluthrin, carbaryl, fenpropathrin, and malathion provide excellent control of avocado lace bug nymphs. Spinosad, abamectin, and mineral oil are much less effective at providing control.

Possible infestations of the avocado lace bug should be reported to the Department of Agriculture’s Plant Pest Control Branch by emailing hdoa.ppc@hawaii.gov.