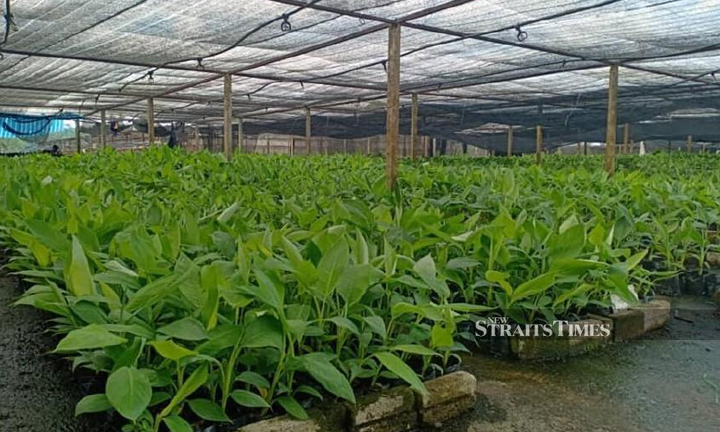 PHOTO: FGV Holdings Bhd is targeting to produce one million banana clones in 2021, a 100 per cent surge from the current production to cater to the niche market demand for fresh bananas and banana-based food industry. SOURCE: FGV/New Strait Times

What began as a banana clonal research has led to an opportunity for FGV Holdings Bhd to mass produce high-quality banana clone varieties.

FGV is targeting to produce one million banana clones in 2021, a 100 per cent surge from the current production to cater to the niche market demand for fresh bananas and banana-based food industry.

The company said the production allows it to fulfil an estimated 30 per cent of national consumption demand for the fruit.

The target will be underpinned by FGV’s banana clonal research that will generate mass production of high-quality banana clone varieties.

“FGV’s Innovation Centre in Bandar Enstek, Negri Sembilan is producing banana clone varieties to fulfil the demand for intercropping during oil palm replanting and banana farmers in the country.

“With experienced and dedicated researchers in tissue culture production, technical advisory and nursery operation, we have the expertise to support the banana agropreneurs and smallholders with superior banana clonal seedlings, banana contract cloning and contract farming,” he said in a statement last Friday.

Haris Fadzilah said this was in line with FGV’s strategic move to expand its integrated farming initiatives while increasing local banana production with a target of 50 per cent market share or equivalent to 1.7 million seedlings to improve banana farmers’ livelihood in Malaysia.

FGV said banana had been identified to have the highest demand and most marketable cash crop in Malaysia, which can generate additional income for oil palm plantation during the immature phase using the intercropping planting system.

The most banana variety in demand by local farmers is the berangan and FGV is currently producing 850,000 ramets annually.

FGV’s mother plant of the berangan clone is certified by the Department of Agriculture under the Planting Material Validation Scheme.

FGV said its banana clonal seedlings were free from disease, have uniform growth and can produce early yield as compared to sucker planting material.

FGV said it was also developing clonal planting material for other high-value crops, such as pineapple, bamboo, vanilla and aquatic plant to fulfil high market demands.