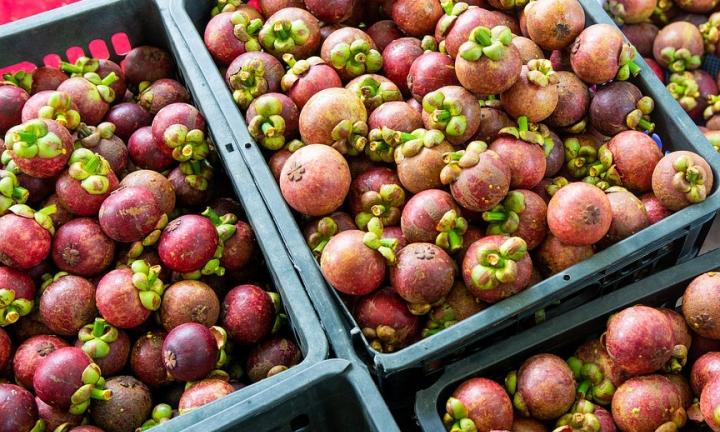 Since July of this year, prices of Thai mangosteens on the Chinese market have been trending downward, falling by as much as 50% in some cases. This drop in prices has been fueled primarily by a stagnant domestic fruit market in Thailand triggered by a recent rise in COVID-19 cases.

Most categories of Thai fruit have experienced a bumper crop this year, with mangosteens one of the rare exceptions. The production of Thai mangosteens was previously forecast to decrease by 6.5% to 315,000 tons in 2021.

The smaller volume of Thai mangosteens available on the market did initially propel prices upward earlier in the season, with 5A or 6A specification fruit selling for as much as 500 Chinese yuan ($77.40) per carton (7.5–8.0 kilogram) in mid-May. However, following the peak shipment period in late May, prices had fallen to 350 yuan ($54.18) per carton (8.5 kilogram) by mid-June. By August, prices had further plunged to only 160–180 yuan ($24.77–27.86) per carton, exerting immense pressure on exporters.

Meanwhile, mangosteens are not the only Thai fruit for which trading has been sluggish. Owing to the weakened Thai economy, some farmers have reportedly taken to the streets in Bangkok to protest against low fruit prices by setting longans and mangosteens alight.

Summer is a peak season for fruit consumption in China as a wider range of fruit is available on the market during this period. Amid this fierce competition, low-quality fruit with a poor appearance is unable to fetch a decent price. In the summer, some small mangosteens with an unattractive appearance were selling for less than 20 yuan ($3.10) per kilogram.