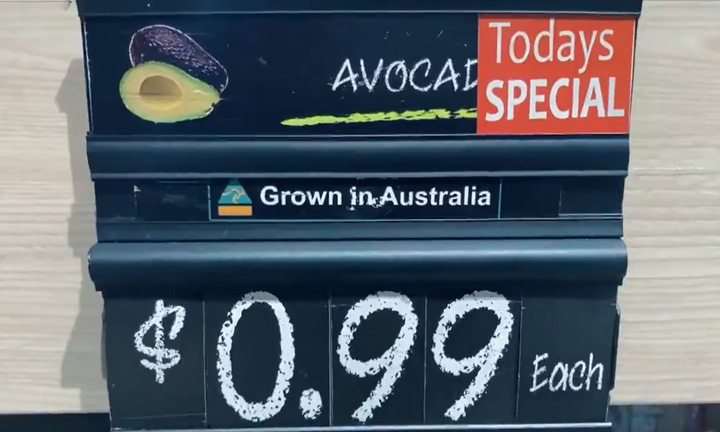 Australia is swimming in avocados thanks to bumper harvests and months of stay-at-home orders that have kept people away from cafe brunches.

Once considered a symbol of lavishness on the brunch menu, avocado prices in Australia more than halved from around A$3 ($2.21) a piece to around A$1 this year — a trend that looks set to stay.

“It’s just the beginning,” said John Tyas, chief executive officer of industry group Avocados Australia, who forecasts production for this year to be about 65% higher than last year.

Avocado supplies in Australia have soared as farmers planted significantly more trees in recent years in response to strong consumer demand for the crop, which can grow all year round in Australia. Many of those new plantings are only just now coming to fruition amid almost perfect conditions across the country, Tyas added.

Western Australia is likely to post a state record for the upcoming avocado crop this year, while the country is poised to produce around 170,000 tons of avocados in 2026, almost double the amount in 2020, according to Avocados Australia.

That surge in production comes at the same time as the pandemic, which has seen Australia impose some of the toughest and longest lockdown measures in the world. Despite a ramped-up nationwide advertising campaign to get Australians to eat more avocados, consumption has suffered due to the closures of restaurants and cafes, which accounts for some 20% of the overall avocado market, Tyas said.

Some of Australia’s avocados are finding their way to Asian markets including Singapore, Malaysia, Japan and Hong Kong, where demand for healthy foods is soaring thanks in part to the pandemic. The drop in prices is also making Australian exports more attractive.

While the sharp drop in prices has been a cause for celebration for consumers, things have been so dire for producers that some farmers say they want to exit the industry altogether due to the likelihood of the glut continuing into the future. Many growers are supplying at cost or below cost of production.

“It’s definitely on some people’s minds as to whether it’s going to be viable for them going forward. They can weather one year like this, but if this is ongoing, I mean the pricing purely, it’s just not sustainable the way it is at the moment,” Tyas said.

Domestic demand in Australia is also likely to pick up as lockdowns start to lift. New South Wales, the most populous state, eased restrictions on Oct. 11 after 107 days of lockdown.

The upcoming Christmas season and warmer weather in Australia will also see demand for avocados improving, said Tyas, adding that consumers “don’t need to hold back at all” because of the depressed prices.

Referring to the trope that people are unable to afford property because they’ve spent their money on smashed avocados, Tyas said: “They can get their housing deposit together and splash out on avocados as well.”