Distribution and cultivars:
Pineapple is widely grown in Asia (Thailand,Philippines,Malaysia,China, andIndia), South Central America (Brazil,Costa Rica).Brazilis the world’s largest producer of pineapple, followed byThailand, Phillipines, andCosta Rica. Although some claim that pineapples were brought toSouth Africaby Jan van Riebeeck in 1665, it is more widely accepted that they were introduced toNatalfromCeylon- present daySri Lanka- in the early 19th century. A native to the tropics, the crop requires areas where the climate is warm, humid and free from extreme temperatures (25 °C being the optimal temperature). The fruit is grown all year round, although the sweetness of the fruit varies depending on various conditions. InSouth Africa, pineapples are grown mainly in theEastern Capeand northernKwaZulu-Nataland, to a lesser extent,Limpopo.
While South Africa has a flourishing pineapple-growing sector, almost a third of the world’s pineapples are produced in Hawaii and South-East Asia. Commercial cultivars of pineapple are generally placed in five groups i.e. Cayenne, Queen, Spanish, Pernambuco and Mordilona. In international trade, the numerous pineapple cultivars are grouped into four main classes: ‘Smooth Cayenne’, ‘Red Spanish’, ‘Queen’, and ‘Abacaxi’, despite much variation in the types within each class. 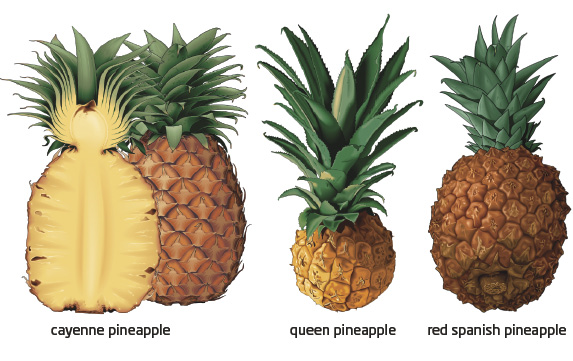 Pineapple Varieties
‘Cayenne’
‘Smooth Cayenne’ or ‘Cayenne’, ‘Cayena Lisa’ in Spanish (often known in India, Sri Lanka, Malaysia and Thailand as ‘Sarawak’ or ‘Kew’) was selected and cultivated by Indians in Venezuela long ago and introduced from Cayenne (French Guyana) in 1820. It is the most important cultivar from this group. More than 70% of the pineapple grown both for canning and fresh fruit in the world is from this cultivar . The production cycle for ‘Smooth Cayenne’ is longer than most of the other cultivars. Because of the plants near freedom from spines except for the needle at the leaf tip and the size-1.8 4.5 kg-cylindrical form, shallow eyes, orange rind, yellow flesh, low fiber, juiciness and rich mildly acid flavor, it has become of greatest importance worldwide even though it is subject to disease and does not ship well. Mainly, it is prized for canning, having sufficient fiber for firm slices and cubes as well as excellent flavor.
There are several clones of ‘Smooth Cayenne’ inHawaiiwhich have been selected for resistance to mealy bug wilt. It is the leading cultivar inTaiwan. In 1975, the Queensland Department of Primary Industries, after 20 years of breeding and testing, released a dual purpose cultivar named the ‘Queensland Cayenne’.South Africa’s Pineapple Research Station,East London, after 20 years of selecting and testing of ‘Smooth Cayenne’ clones, has chosen 4 as superior especially for the canning industry.
In Malaysia, the local clones of this group are ‘Sarawak’ (in Peninsular Malaysia), ‘Samarahan’, ‘Nanas Durian’ and ‘Nanas Paun’ (in Sarawak) and ‘Babagon’ (in Sabah ).
‘Sarawak’ is vigorous growing and bears large (about 2.5 kg), egg-shaped fruit held on a short and strong peduncle. The fruitlets or ‘eyes’ are broad and flat. The flesh is pale yellow, very juicy with fairly high acid (0.5-0.9%) and sugar (12-16 ° Brix). Leaves are generally smooth with occasional spines at the tips.
Cultivars in this group are usually resistant to fruit collapse and bacterial heart rot diseases but susceptible to black heart disorder due to low temperature. Vegetative propagation is normally by shoots and slips, which are quite limited in production.
InMalaysia, the ‘Sarawak’ clone does not respond readily to flower-induction, especially when grown on peat soil that encourages robust vegetative growth. Hence, the cultivation of theCayennetype of pineapple in this country is limited to mineral soil areas such as Titi (Negeri Sembilan), Setiu (Terengganu) (Penampang / Babagon) Sabah and some parts of Sarawak.
‘Hilo’is a variant of ‘Smooth Cayenne’ selected in Hawaii in 1960. The plant is more compact, the fruit is smaller, more cylindrical; produces no slips but numerous suckers It may be the same as the ‘Cayenne Lisse’ strain grown in Martinique and on the Ivory Coast, the fruit of which weighs from 1-1 1/2 kg and has a very small crown.
‘St. Michael’, another strain of ‘Smooth Cayenne’ is the famous product of theAzores. The fruit weighs 2.25-2.75 kg, has a very small crown, a small core, is sweet with low acidity, and some regard it as insipid when fully ripe.

‘Bumanguesa’, ofVenezuela andColombia, is probably a mutation of ‘Perolera’. The fruit is red or purple externally, cylindrical with square ends, shallow eyes, deep-yellow flesh,very slender core but has slips around the crown and too many basal slips to suit modern commercial requirements.

‘Kona Sugarloaf’: 2.5–3 kg, white flesh with no woodiness in the center. Cylindrical in shape, it has high sugar content but no acid. It is unusually sweet fruit.
‘Giant Kew’, well-known in India, bears a large fruit averaging 2.75 kg often up to 4.5 kg and occasionally up to 10 kg. The core is large and its extraction results in too large a hole in canned slices.

The related ‘Green Selangor‘ (also called ‘Selangor Green’, ‘Green Spanish’, and ‘Selassie’) ofMalaysiahas all-green leaves prickly only at the tips. The flesh is golden-yellow, often with white dots. This cultivar is grown for canning.

‘Pineapple ‘Panare’ named after the tribe of Indians that has grown it for a long time, is commercially grown to a small extent in the State ofBolivar,Venezuela. The plant is of medium size with long, spiny leaves. The fruit is bottle-shaped, small, 0.45-0.70 kg, with small crown; ovate, with deep eyes; orange externally with deep-yellow flesh; slightly fragrant, with little fiber and small core.

The cultivars in this group are widely distributed and quite extensively cultivated for fresh fruits because of its high sugar content and unsuitable canning qualities, is cultivated only for fresh consumption in the world. In Peninsular Malaysia, it is commonly known as ˜Nanas Moris’ derived from the more common international name ˜Mauritius’ and in Sarawak it is called ˜Sarikei’. It is also known as ˜Phuket’, ˜Rough McGregor’, ˜Ripley Queen’, ˜Alexandra’ and ˜Victoria’ in other parts of the world.
Seventy percent of the fresh pineapple fruit produced inMalaysiais from ˜Nanas Moris’.

It is also the leading cultivar in South Africa, Queenslandand the Philippines. The plant is dwarf with short and very spiny, dark purplish-green leaves, compact, more cold and disease resistant than ‘Smooth Cayenne’. The plant sometimes produce robust slips in some variants and most have an average of 2 suckers or more which is sufficient for ratooning or replanting. The fruit is conical, deep-yellow, with deep eyes which require a thick cut to remove the peel completely; is less fibrous than ‘Smooth Cayenne’. It is juicy and sweet, of fine flavor with a small, tender core. Fruits are spiny, golden yellow in color and emit pleasant aroma and flavor when ripe. The fruits are harvested when eyes turns yellow. Average weight of fruit varies from 600 – 800 g. It possesses all the good organoleptic qualities. Juice is bright yellow in color. TSS varies from 10o to 14o Brix depending upon the stage of maturity and season. PH4 to 4.5. Water content 80% to 90%. It is sold fresh and keeps well. It is only fair for canning because of its shape which makes for much waste. Queen cultivars are robust and show higher tolerance to stress, pests and diseases than ‘Smooth Cayenne’. However they are susceptible to black heart disorder.

‘MacGregor’, a variant of ‘Nasal Queen’ selected in South Africa and grown also in Queensland, is a spreading, more vigorous plant with broad leaves and large suckers produced less freely. The fruit is cylindrical, medium to large, with firm flesh and flavor resembling ‘Queen’.
‘James Queen’ (formerly ‘Z’) is a mutation of ‘Nasal Queen’ that originated inSouth Africa. It has larger fruit with square shoulders.
‘Ripley’ or ‘Ripley Queen’, ,grown in Queensland, is a dwarf, compact plant with crimson tinge on leaves; takes 22 weeks from flowering to fruit maturity; is an irregular bearer. The fruit weighs 1.36-2.7 kg; is pale-copper externally; flesh is pale-yellow, non-fibrous, very sweet and rich. InFlorida this cultivar tends to produce suckers without fruiting.

‘Intorachit’ and ‘Chantabun’.
‘Mauritius’ (also known as ‘European Pine’, ‘Malacca Queen’, ‘Red Ceylon’ and ‘Red Malacca’) is one of the 2 leading pineapple cultivars in Malaya; also important in India and Ceylon. The leaves are dark green with broad red central stripe and red spines on the margins. The fruit is small, 1.36-2.25 kg, yellow externally; has a thin core and very sweet flesh. It is sold fresh and utilized for juice.
‘Natal Queen’ ofSouth Africa, also grown inEl Salvador, produces many suckers. The fruit weighs 0.75-0.9 kg, golden yellow flesh, crisp texture and delicate mild flavor. Well adapted to fresh consumption. Fruit keeps well after ripening. Leaves are spiny.
‘Pernambuco’ (‘Eleuthera’) and Mordilona
Their cultivation is restricted to certain South American countries like Brazil, Ecuador, Colombia, Venezuela and Peru. Pernambuco has an erect growth habit, semi-vigorous with long spiny leaves. The fruits are small, slender and carried on long peduncles. The flesh is white, tender and juicy with low acid and mild flavour. Slips are prominent and numerous, occasionally to the extent of hiding the fruit. Perola is the best known in this group and the most important commercial cultivar inBrazil. It is very susceptible to fusariosis disease which is devastating inBrazil but not important here. ‘Mordilona’ is typified by the ‘piping’ leaf margin where a part of the lower epidermis folds over the edge of the leaf to give a completely spineless leaf form. ‘Perolera’ and ‘Manzana’ are the best known cultivars in this group; they are grown mainly in the northeastern Andes of Colombia andVenezuela. The irregular, cylindrical fruit is large (1.5 to 3 kg) with attractive yellow to orange peel borne on a long peduncle. The flesh is cream to yellow, firm and sweet. Numerous crownlets protrude from the base of the crown and the upper eyes and slips are numerous. ‘Perolera’ has high vitamin C content, is resistant to fusariosis disease and commonly used as a parent in breeding programmes.
‘Pernambuco’ (‘Eleuthera’): 1–2 kg with pale yellow to white flesh. Sweet, melting and excellent for eating fresh. Poorly adapted for shipping.
Cylindrical in shape and with high sugar and acid content. Well adapted to canning and processing. Leaves without spines. This is the variety fromHawaii, and the most easily obtainable inU.S.grocery stores. Both 73-114 and 73-50 are of this cultivar.