A young doctor travelled to nine countries where dragon fruit is cultivated to grow the exotic fruit in Telangana State, after he saw a few enthusiastic farmers in India struggling to reap dividends by cultivating this crop. Cultivating dragon fruit by identifying heat-tolerant and high-productive varieties, Dr Srinivasa Rao Madhavaram (33) has transformed his dragon fruit farm literally into a research centre, where an enthusiast farmer can learn everything about the fruit’s cultivation without spending a rupee. He has also found ways to get yield round the year to produce 15 tonnes on each acre annually. 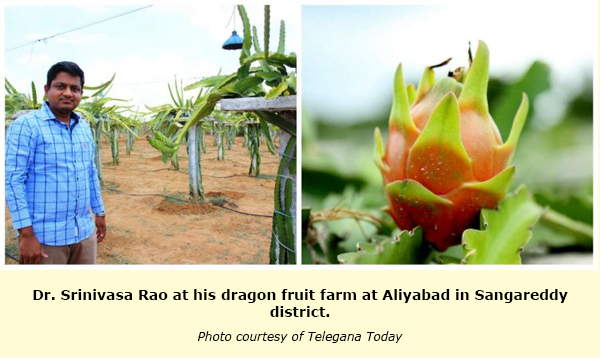 Dr Rao, born and brought up in Kukatpally and completed MD (General Medicine), took up the cultivation in 11 acres of land his family owned at Aliyabad in Sangareddy district.

So, what inspired Dr Rao to take up dragon fruit cultivation? To make Rao’s engagement ceremony special, his elder brother Chandrashekar had brought some rare fruits found across the globe to present them to the bride, which is part of the Hindu engagement tradition. The young doctor found it beautiful, tasty and he started studying about the fruit and its cultivation after the engagement ceremony.

He visited Horticulture department Telangana to enquire about the cultivation, but he was told it would not get much-desired results in Indian conditions. As his interest refused to die down, he traveled all the way to Maharashtra after he was informed a farmer taking up cultivation of the fruit in March 2016. He had bought about 1,000 plants from the farmer in September, but only 20 per cent of them had survived. Undeterred by the failure in his first attempt, the young doctor has decided to go on Southeast Asian, where the Dragon fruit is cultivated predominantly, sojourn making trips to Indonesia, Malaysia and Thailand in November 2016. To compare the challenges being faced by the Indian farmers, Rao has travelled to the Indian Dragon fruit farms located in Gujarat, Rajasthan, Karnataka, Kerala and West Bengal three months later. And he also made visits to Spain, Israel and Sri Lanka as part of his extensive study on Dragon fruit cultivation. To gain further expertise, he underwent five-day training at Southern Horticulture Research Institute (SOFRI) University, Vietnam on Dragon Fruit Cultivation and also made a visit to Dragon Fruit farms in the Philippines.

Speaking to Telangana Today, Srinivas Rao said that Indian Ambassador to Vietnam Harish Parvathaneni, a Telugu man, has helped him in getting training at SOFRI. He further said his visit to Binh Thuan Province, a world known hub for Dragon Fruit Cultivation in Vietnam, has given a lot of confidence after seeing how the cultivation of Dragon fruit has changed the lives of farmers forever.

He took up his first commercial cultivation in November 2017 at his farm and started getting a good yield within 10 months in September 2018. Rao’s farm is home for eight varieties of Dragon fruit found across the globe, but only three varieties were chosen for commercial cultivation. While Indian farmers were getting just 3 to 4 tonnes of production in a year on each acre, the doctor has said the Vietnam farmers were getting 15 tonnes a year, which is making a difference in the lives of Vietnamese farmers. Dr Rao has got great support from his father Prasad Rao and brother Chandrashekar.