CAMBODIA: China urged to speed up work on mango shipments

Cambodia has urged China to speed work on phytosanitary requirements to greenlight exports of Cambodian mangoes.

On Thursday, Agriculture Minister Veng Sakhon and a Chinese delegation led by Hu Wei, Vice Minister of the Administration of Customs of China, met in Phnom Penh to discuss phytosanitary requirements for the fruit. 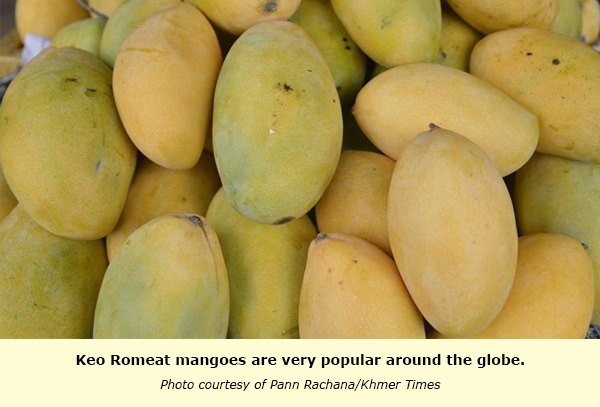 “I have been pushing the China Certification and Inspection Group based in Cambodia to work with the General Department of Agriculture and the Ministry of Foreign Affairs to speed up work on the issue as much as possible,” Minister Sakhon said.

The two parties established an expert team to push forward negotiations on sanitary and phytosanitary requirements for mango and other agricultural products.

“Now we are ready and trying our best to cooperate with China to negotiate on phytosanitary requirements,” he said.

He said that dragon fruits, longan, coconuts, and bird nests are other products that may soon be exported to China.

Last year, Mr Sakhon and China’s Top Fruit Company discussed the direct shipment of Cambodian mango to China. They agreed that Cambodia has the potential to export about 500,000 tonnes of mangoes per year to China.

First, the fruits must be inspected by China’s General Administration of Quality Supervision, Inspection and Quarantine (AQSIQ). Then, before shipments can begin, a protocol on phytosanitary requirements must be signed.

The company said that the protocol will allow direct shipments from Cambodia, which will be much cheaper than exporting through a third country, like Vietnam. Shipping costs could be reduced by as much as $400 per tonne by shipping directly from Sihanoukville’s deep-sea port, the company said.

In Chayvan, president of the Kampong Speu Mango Association, told Khmer Times on Friday that he wants to see shipments of Cambodian mango to China soon as possible.

He said ten Chinese companies have come to him to inquire about their mangoes. He said most of those firms are currently buying Cambodian mangoes from Vietnamese merchants, who buy the fruit in bulk.

Mr Chayvan said that the Keo Romeat mango variety is very popular in international markets, most notably in China, adding that it is mostly exported by Vietnam and Thailand.

He noted that about 99 percent of mangoes grown in the province belong to the Keo Romeat variety. From October to May, the province harvested about 50 tonnes of mangoes.

Figures from the General Directorate of Agriculture show that Cambodia exported about 15,300 tonnes of mangoes from January to March.