The carambola or star fruit is one of the tropical fruits that can only be grown in one place in continental Europe: Malaga. The Institute of Subtropical and Mediterranean Horticulture La Mayora has a collection of fifteen varieties of star fruits from different parts of the world, which it uses to assess their behavior and cultivation conditions on the coast of Malaga. 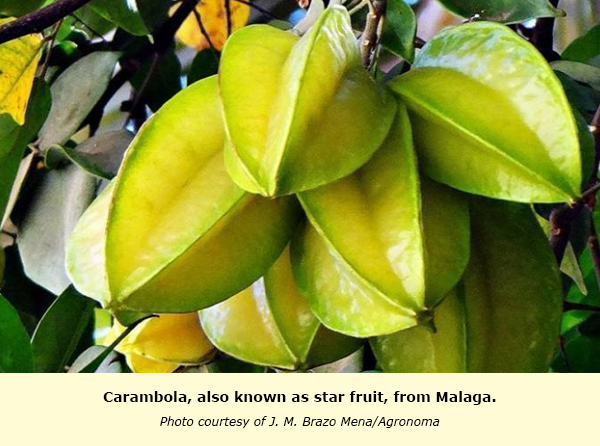 Iñaki Hormaza, the head of the Department of Subtropical Fruit Growing, stated that the star fruit, which is normally imported from Asia and America, “has a very short harvest life, thus it is harvested when it’s green so that it arrives in good conditions in Spain.” According to him, that is the great problem that the imported star fruit has. “Since the fruit hasn’t completely ripened when it’s harvested it doesn’t reach the flavor it would reach if it were collected later on.”

Hormaza insisted that star fruit could only be grown in Malaga in Europe, thanks to its subtropical climate, mild temperatures, and absence of frost that favor this crop. “Even though all of the fifteen varieties in La Mayora are appealing because they have different flavors and textures, we believe that there are two or three outstanding varieties,” the researcher said.

Next plantings
As explained by the head of the Department of Subtropical Fruit Growing, the cultivation of different varieties of star fruit allows producing this fruit for many more months. Currently, the production of this fruit in the Axarquia coast starts in October, with earlier varieties, and lasts until March, so it’s possible to extend this product’s short campaign.

The star fruit grows in an evergreen shrub that can get to be nearly five meters high. Its fruit is used in salads and its pulp is juicy, a bit fibrous, and sour. It contains vitamins A and C, phosphorus, and potassium. “The fruit that arrives in Europe comes from third countries. We know how to produce it, and even though it isn’t a known fruit, consumers are increasingly more interested in trying exotic products,” said Hormaza.