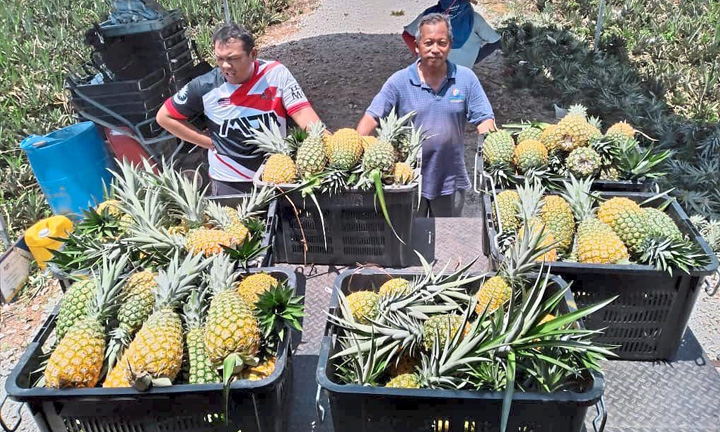 The current monsoon season has not affected the pineapple production in Alor Bukit, Pontian, as farmers made preparations from as early as October to face such weather before the season started.

According to pineapple farmer Khalit Kasmoin, 64, their only issue with rain was that it would force the fruits to ripen quicker than their normal harvest date.

“The excess water flowing down from Gunung Pulai affected the growth of the fruit and turned it yellow, so it had to be harvested and sold quickly to avoid it from going bad, ” he said when contacted.

He said the farmers managed to sell their early harvest quickly with the help of the Malaysian Pineapple Industry Board (LPNM) Johor.

“The only difference with a pineapple harvested during the monsoon season is in the taste, which tends to be less sweet compared to the ones that are plucked outside the season, ” he added.

Another farmer, Iskandar Zulkarnain, 48, said better management and insight were needed during this season as it was not easy to predict how the rain would affect the growth of the fruit.

“The best way to do this during this season is to make early preparations such as clearing the land and carrying out harvesting as well as replanting before the monsoon season.

“It will be doubly hard to do all of this work during the monsoon because the soil will be soft and that also makes it difficult for lorries to come in to collect the fruits.

“Clearing the land in the rainy season is also not easy as some parts of the plantation will be waterlogged,” he explained.

He highlighted that bad management could also lead to an oversupply of fruits.

“Customers usually have targeted dates for when they want to buy and collect the pineapples.

“But sometimes during this season, the rain will force the pineapple to ripen faster, meaning that we have an early supply but no demand, so farmers will need to be extra careful and vigilant, ” he added.

LPNM chairman Datuk Dr Sahruddin Jamal said the board had introduced the LPNM Disaster Fund to help farmers whose crops were destroyed by floods.

“The aid will be given in the form of pineapple seeds, fertilizers and other infrastructure or mechanical equipment that farmers need. No cash is involved, ” he said.

He added that LPNM was also part of the Johor Food Security Committee established by the state government.