AUSTRALIA: Without tourists to put to work, farms are short on labor 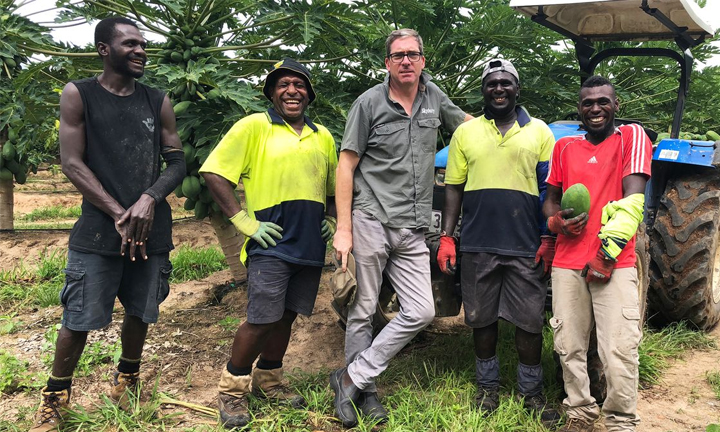 Australia crushed the coronavirus with one of the strictest border-control regimes in the world. But that success is causing trouble for the nation’s farmers, who can’t get the labor they need to pick and plant crops. Backpacking tourists, who typically account for 80% of the workforce harvesting fresh produce, have left in droves since the pandemic began, with no arrivals to replace them. Seasonal workers from the Pacific islands are also mostly locked out, despite many nations being considered free of Covid-19.

Quarantining laborers on farms has been tried, but it falls well short of what growers need. Few Australians have taken up offers of government money to relocate to rural areas. The labor shortage is hurting the economy: Farmers report declining profits, and some fear foreclosure. Many are now planting fewer crops, which could drive up food prices.

With exhaustion rising among regular staff at the 190-hectare Skybury farm and little prospect of extra help, Mr. Fagg and colleagues decided late last year to rip out older papaya plants and sacrifice around $100,000 in monthly revenue.

“Our production has dropped by at least a third,” Mr. Fagg said of the farm, which sits on roughly three-quarters of a square mile near Mareeba, in Queensland state. “It’s really frustrating, especially when we’ve worked so hard to build demand for papayas.”

Many countries rely on foreign labor to harvest crops but typically recruit seasonal laborers rather than tourists. The pandemic upended these flows, too, as workers from poorer parts of the European Union couldn’t take up farm jobs in richer countries such as France when borders closed.

With the U.S., U.K. and some other countries making progress toward vaccinating their populations, hopes are rising that the pandemic’s economic impact will lessen. Australia aims to complete a Covid-19 vaccination campaign by the end of October, and its economy is emerging from its first recession in 29 years.

Still, lawmakers haven’t fixed a date for reopening Australia’s borders, frustrating growers who say they can’t plan for growing cycles that last months. Planting decisions could affect consumers across Asia, as Australia is among the world’s largest exporters of fruit, wheat and cotton.

The Australian Fresh Produce Alliance, an industry group, predicts the labor shortage could raise fruit and vegetable prices by 60% and reduce the value of the horticulture industry by nearly $5 billion. Labor-intensive crops, such as berries, are most at risk.

With a population of 25.7 million in a territory about the size of the continental U.S., Australia has long lacked the agricultural workforce it needs.

Under a visa arrangement devised around 15 years ago, backpackers can extend their stay from one year to two if they agree to complete at least 88 days’ work in regional Australia.

Around 40,000 backpackers are typically employed on Australian farms, roughly one third of those with a Working Holiday Maker visa. The arrangement is popular with visitors from the U.K., France, Italy and some Asian nations.

However, the pandemic has shrunk this workforce to around 16,000 people, and it is continuing to drop as backpackers fly home. In addition, only 2,400 seasonal laborers from Pacific Island nations have arrived from among the more than 22,000 pre-vetted for visas last year.

Agriculture Minister David Littleproud forecast a difficult season for growers. “It’s not as if this is a new problem; we knew back in April that we would be short of labor,” he said.

Mr. Littleproud said Australia’s quarantine system is the main bottleneck, as places are set aside for returning citizens and residents. Quarantine arrangements are made by state and territory leaders, who want to keep out highly contagious variants of the coronavirus.

Some states have experimented with quarantining workers on farms. In October, 151 laborers from Tonga flew by charter flight to Queensland to pick grapes. They wore high-visibility clothing and used color-coded equipment to keep them apart on the farm for 14 days while being tested regularly for Covid-19.

Mark Furner, Queensland’s agriculture minister, said the trial has been extended and that more flights are planned.

Other initiatives include further extending backpackers’ visas if they work on farms. Governments have offered cash to Australians to relocate to rural areas, while students who do summer work on farms are eligible for grants. However, take-up has been small, and Australia’s recovering economy is making those programs less attractive.

Bill Bulmer, chairman of Ausveg, which represents vegetable and potato growers, says the sector is short around 30,000 workers. At his own farm producing iceberg lettuce, baby spinach and other leafy greens in southeastern Australia’s East Gippsland, crop losses have exceeded $600,000 because of the labor shortfall.

“For many crops, it’s been a bumper year, and it’s devastating for growers to see it rot on the tree or fall to the ground or to be plowed into the soil,” said Richard Shannon, manager of policy and advocacy at Growcom, Queensland’s peak horticulture body.

A quarter of the 65 respondents to Growcom’s crop-loss register since December say the labor shortage has affected their physical and mental health, including increased working hours, elevated stress levels, loss of confidence and depression. Five growers said they are at risk of being foreclosed on by their bank or are considering selling up.

Gavin Scurr, managing director of Piñata Farms, recently hired a new farm manager for his raspberry-growing operation in Tasmania after the labor shortage contributed to the previous manager’s hospitalization under extreme stress.

Labor shortages meant Piñata Farms couldn’t harvest 4 million punnets of strawberries, the size container the fruit is often sold in, at an operation in Queensland, costing the company around $5.5 million in lost revenue. In addition, 300 tons of pineapples were unable to be picked.

“We were going to plant strawberries this coming winter, but we don’t have enough labor to erect the strawberry infrastructure, let alone grow them,” said Mr. Scurr, 52 years old and a third-generation farmer. “Maybe next year, maybe longer.”