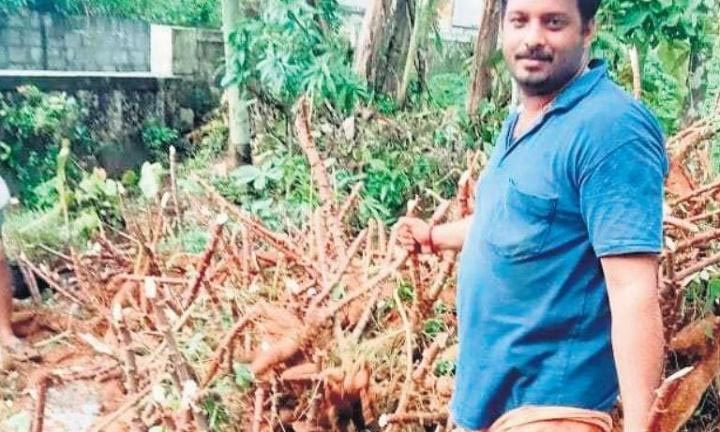 Hit hard by the lockdown and the unseasonal rain, the district’s farmers — especially those cultivating tapioca and pineapple — are struggling to sell their produce as they continue to be offered prices way below the base rate set by the state government.“With the lockdown in force, transportation to other states is not possible. Things were especially hard when the triple lockdown was introduced,” said farmer K P Sivadasan, who has cultivated pineapple on around 50 acres of land both in Ernakulam and Thrissur.

“The situation is such that we are getting just about Rs 5 per fruit,” he said, pointing out that a farmer spends around Rs 8 to buy individual pineapple plants and then more funds have to be coughed up for fertilisers and pesticide. “So, you can calculate the huge loss we are incurring. We can’t see our produce rotting away in the fields. So, we have begun selling fruits directly to the flat owners in Kochi. We are selling pineapple at Rs 15 per kg,” he said.

Some days are good for Sivadasan, who manages to sell around 100kg in a single apartment complex. “We pack the fruits neatly and deliver it at the customer’s doorstep,” he said.“We used to set up roadside stalls to sell the produce. But we can’t do that anymore due to the lockdown. The police won’t allow it,” Sivadasan said. Though a few processing companies had promised farmers that they would buy up the fruits, nothing happened, he said. “They called us and ordered three tonnes of fruits. But that was it. They have gone silent now,” he added.

Similar is the situation of tapioca farmers like Praveen S Nair. “Nearly all farmers are forced to give away our crops for free. Recently, some organisations approached us to procure tapioca for the people of Chellanam. The farmers took only a nominal price,” he said. The farmers are trying to offload the tubers before June 1, when the monsoon onset is predicted.

Some benefactors have formed WhatsApp groups to help out the struggling farmers. One such group offers 5kg of pineapple and 3kg of tapioca for Rs 150. “But due to insufficient orders, they have stopped supply,” said Indu M, an apartment owner in the city.

Meanwhile, officials with the Agriculture department said measures were being taken to help farmers out. “Steps have been initiated at the panchayat and block levels to procure the produce,” said Deepa T O, agriculture department assistant director, marketing. In case of pineapples, processing units and dairy units have been entrusted with the task of procurement, she said. As for tapioca, the produce from all registered farmers will be procured and processed in drying units, she added.