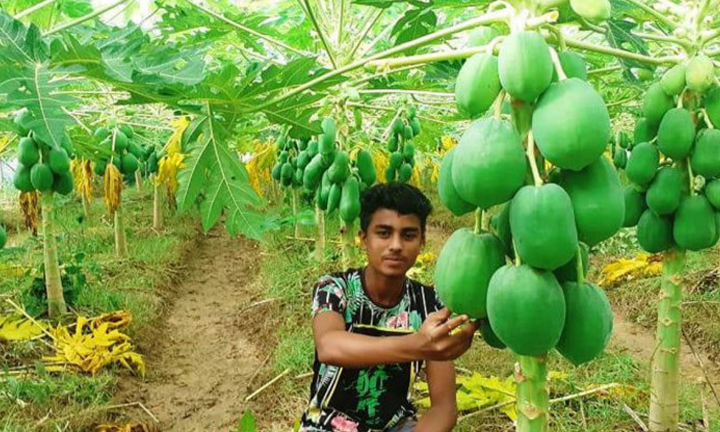 Farmers are enjoying tremendous success cultivating papaya in fallow lands in Sreemangal upazila of Moulvibazar district, thanks to bumper yield and a reasonable market price.

Favourable weather conditions and the availability of cheap fertilisers led to a huge harvest this season, according to the farmers.

Farmer Ali Hossain Liton of Khoajpur village of Sindurkhan union under Sreemangal upazila has seen the face of success in papaya cultivation.

This is the first time he has cultivated hybrid ‘Babu’ variety of papaya in one bigha of land. The yield has been very good and so is the price.

Other farmers in the area are also being encouraged to cultivate the papaya variety seeing his success.

He said, “I have planted hybrid Babu variety of papaya on one bigha of land along with other vegetables. Saplings were planted in the field in the last week of January. The plants bore flowers and fruits in the first week of May. At the end of July, the fruits became mature for harvesting.”

“I have already sold about 1,200 kg of papaya and earned Tk 25,200,” he said, adding that he will be able to sell papaya for eight consecutive months and earn Tk one lakh and he spent only Tk six thousand for cultivating papaya in the land.

“If you cultivate this variety, you don’t have to use much pesticide. Additionally, the variety is resistant to Yellow Mojahex virus,” he further said.

Other farmers are also showing interest to cultivate the variety of papaya.

With help from the Department of Agricultural Extension (DAE), Liton’s initiative has become a success story that other farmers in the region are now trying to replicate, according to the DAE office in Moulvibazar.

The DAE is trying to introduce the high yielding variety of papaya in other upazilas of the district.

“In addition to the appealing appearance, the papaya of this variety tastes as sweet as honey,” Liton said.

Besides, it also has a higher demand in the market, he added.

Bidhan Das, another resident of the same area, said that papaya is a profitable crop if it can be cultivated well.

Sajjad Mia, a fellow farmer who visited the farm, said this variety tastes as good as it looks.

Abdul Kuddus, a trader of papaya in Bandarbazar area in Sylhet city, said the demand for ripe papaya is very low during winter, but its demand as a vegetable remains the same all year round.

Sreemangal Upazila Agriculture Officer Nilufar Yasmin Monalisa Sweety said the cultivation of hybrid varieties of papaya has increased in the upazila. Farmers are getting benefits in a short time by cultivating hybrid ‘Babu’ variety.

Liton stands as an epitome of success. Seeing him, many farmers have become interested in papaya cultivation, she said.

She also added that the agriculture department is imparting various trainings to the papaya farmers including dealing with the virus.

Dilip Kumar Adhikari, additional director of the DAE office in Sylhet, said papaya contains a lot of nutrients. All kinds of support are being given to increase the interest of farmers in papaya cultivation.

“We are in constant touch with the Upazila Agriculture Office and have been providing all kinds of assistance as required. If the unemployed youths come forward to cultivate papaya, we are ready to cooperate with them in all possible ways,” he added.