FEATURE: Banana blossom may be the next vegan food star

Following on from beetroot burgers and jackfruit curries, the next star of the vegan “meat” world hails from the gardens of south-east Asia and looks somewhat like an artichoke.

Banana blossom, also known as a “banana heart”, is a fleshy, purple-skinned flower, shaped like a tear, which grows at the end of a banana fruit cluster. Traditionally used in south-east Asian and Indian cooking, it can also be eaten raw and its chunky, flaky texture makes it an ideal substitute for fish. 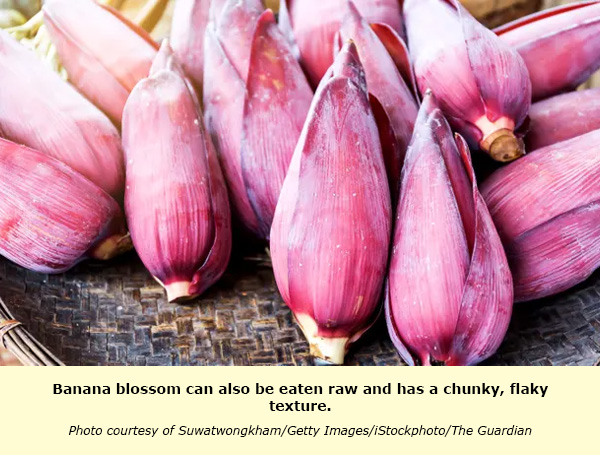 Sainsbury’s, which will be rolling out a series of plant-based meals later this year, is to include banana blossom in its ready meals in the hope the flower will catch on among a burgeoning population of shoppers looking for meat-free alternatives.

Alexa Masterson-Jones, the trends and innovation manager at Sainsbury’s, said: “I was in a restaurant called Little Kolkata [in London] with my team, and we ordered a banana blossom kofta.

“When it arrived, we thought they had mistakenly given us a lamb kofta, because it tasted so meaty. We thought this was an amazing new ingredient, but a colleague, Jay, who grew up in Kolkata, said ‘When I was growing up, we grew banana blossom at the bottom of the garden’.”

Masterson-Jones researched recipes and cooking techniques, and even spoke to Jay’s mother for inspiration. “Traditionally, it was never used as a meat alternative, but as a way to get more vegetables into dishes,” she said. Now, fresh banana blossom has started to appear in greengrocers, she added.

One in eight Britons are now vegetarian or vegan, according to research by Waitrose, and about 22 million people identify as “flexitarians” – people who eat meat but want to reduce their consumption. Supermarkets are increasing their vegan lines, from “ham” to “goujons” and “meatballs” to “burgers” made from soya, seitan, tempeh and Quorn.

Waitrose is to add a further 10 lines in April to its existing range of 65 products, including a seitan and mushroom burger. Marks & Spencer’s Plant Kitchen is a vegan range of 60 products including soya-based nuggets, cauliflower popcorn and the first vegan coleslaw.

With plant-based alternatives, there are two camps: those looking for alternative proteins such as pea and soya, and those who opt for ingredients including banana blossom that are nutritious and fibrous, but are not going to provide the same protein content as meat.

“Different vegetables have their own unique structural properties, so do better jobs at replicating different things. For example, the mushrooms we use in our Shroomdogs do a great job at emulating that sausage-like texture, while jackfruit is great at replicating pulled pork,” said Masterton-Jones.

Banana blossom has “quite a neutral flavour, so it absorbs flavours really well. We’ve been soaking it in kombu and wrapping it in nori, to put that fishy flavour through it, and created a battered cod-esque fillet,” she said. As banana blossom is fibrous, it can stand a lot of seasoning. “We’ve been stir-frying it, putting it in dumplings and croquettes, and we’ve found that if you dice it up really small, it has a nice mince texture as well,” she said.

Gizzi Erskine, the chef and co-founder of Filth, a soya mince burger restaurant in London, said: “We’re led to believe that meat is the only way to get high-quality proteins, and we know that’s not the case.

“People are now wanting to broaden their knowledge about choosing sustainable food options, and they know they can get the same nutrition from meat-free proteins.”

Taste test
At the Thai restaurant Supawan in London, try the Yum Hua Plee salad. Presented in a teardrop purple leaf, it is chopped up into an almost mince-like state and has a surprisingly meaty texture, albeit slightly stringy. Some say it tastes like artichoke, but here it seems more of a vehicle than having its own identity, with the chilli and spices giving it heat and sharpness.

The London chip shop Sutton and Sons serves a lightly pickled artichoke resemblance. It certainly looks like the real deal, but does quite have the flaky texture on cutting. Having been marinated in seaweed and samphire, this is probably the closest you will get to the flavour of fish.