For Ismail Hossain, 45, rice farming twice a year has been a tradition for generations and the only source of income for his family of five.

Two years ago, the Muslim father of three decided to quit traditional rice farming in favor of mangoes, so he planted mango saplings all over his 2.80 acres of agricultural land at Talanda village in the Tanore area of Rajshahi district in northern Bangladesh. 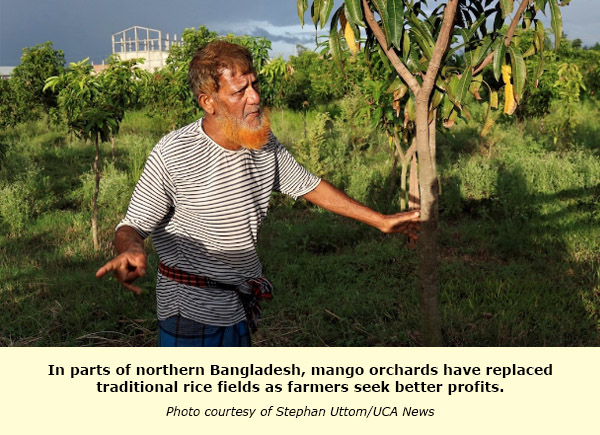 Various reasons forced Hossain into the switch, including high production and harvesting costs, the water crisis and a fall in the price of rice.

“Over the past five to seven years, rice production in my fields has reduced for various reasons: the water shortage, unfavorable weather and a decline in land fertility,” Hossain told ucanews.com. “Also, the price of fertilizer, pesticides and labor doubled. The last time I made a profit from my rice was seven years ago.”

When Hossain cultivated rice, his profit was just 50,000 taka (USD 592) a year; his financial burden seems likely to continue — on average, it takes about two years for mango trees to yield fruit, so he will only know how profitable his mango orchard is next summer. He is however, making money by utilizing the spare space to grow lentils and garlic — they are already bringing in a profit of about 90,000 taka a year.

Hossain believes his orchard will yield good profits as mango is the most popular fruit in Bangladesh and it is less expensive to maintain and produce.

“You don’t need a lot of workers to look after a mango orchard and you don’t need to spend a lot on extensive irrigation and pesticides. Many local farmers like me have already started making the move,” he said.

Dr. Dalim Biswas has been an agricultural scientist and taught in various agricultural universities in the country for years.

He joined T. Islam Agro Food Industries in the Nachol area of Chapai Nawabganj district two years ago as a manager.

Under his supervision, the company has planted 13,000 mango, 300 guava and dozens of banana trees on about 25 acres of land.

“Even five years ago, these were rice fields but the company was making losses every year. Now it is making a net profit of about 100,000 taka a year,” Biswas, a Muslim.

Biswas started planting mangoes on eight acres of his own land three years ago and this summer made 150,000 taka net profit from them.

“In the current circumstances I think I could barely have made 20,000 taka if I had planted rice in the fields instead,” he said.

A changing agricultural trend
In largely agrarian Bangladesh, rice is the staple food grain for most people.

Bangladesh ranks fourth in the world in rice production after India, China and Indonesia. Occupying about 75 percent of cropland and an estimated 8.57 million hectares of arable land, rice plays a vital role in the Bangladesh economy, according to the Bangladesh Rice Research Institute (BRRI).

Rice farming offers employment for about 48 percent of households or about 13 million rural families, the BRRI says.
Bangladesh produced 36.2 million tons of rice in 2017-18, according to the Department of Agricultural Extension (DAE), which estimated that rice production hit a new high with an additional 1.3 million tons this year.

However, high production costs and low prices are forcing many farmers to prefer working with such fruit as mangoes, guavas and bananas.

Many farmers have started planting mango trees on their own land, while others have leased out their land for the same purpose.

Some locals have also found renewed interest in fish farming.

The northern districts of Rajshahi, Natore, Naogaon and Chapai Nawabganj are known as being the rice hub of Bangladesh. In the past 10 years, rice cultivation area in the four districts shrank by 200,000 hectares, but over the same period mango orchards have doubled to 70,346 hectares, according to the DAE.

Good or risky?
The scarcity of water for irrigation and financial losses due to low prices are driving away farmers from rice cultivation in the north, says Shamsul Haque, a deputy director of the DAE in Rajshahi district.

“There is no problem with fertility of the land, but water scarcity is a serious headache in many places. Due to low rainfall, farmers need to rely on underground water for irrigation, which is not readily available everywhere. Also, the low price of rice forced many farmers to incur losses and debts,” Haque said.

In the past 10 years, thousands of farmers have switched from rice farming to fruit and vegetables, including potato, onion and garlic, and their production has increased three to four times, he said.

“As long as farmlands are properly utilized, the environment is unhurt and farmers can make a profit; there is no problem in having a diversity of cultivation. This is so far a positive trend,” he added.

“This region is famous for rice but rice fields require lots of water. As the surface water has not been sufficient, people have relied heavily on groundwater, causing significant depletion. Now water has become even more scarce and people are struggling to cultivate rice,” Costa said.

The decline in the price of rice is also a major factor behind changing agricultural trends, he added.

However, Costa warns that changes in the agricultural cycle poses a risk to food security in Bangladesh.

“Even now, the northern region produces 30-40 percent of total rice cultivated and contributes to the near self-sufficiency in food in a densely populous country like Bangladesh,” he said. “A gradual decline in rice cultivation might result in a food crisis, especially during natural disasters.”