Malawi mangoes, grown in their namesake African country by a European-African firm, Malawi Mangoes Ltd, are being marketed as “99 per cent similar” to the Ratnagiri Hapus.

37-year-old Aneesh Pandey, a fruit retailer, was among a group of buyers waiting for the first consignment of mangoes from Africa at the APMC market in Vashi. When the plywood boxes finally came and were opened, the distinctive smell of Alphonso filled the air. “It is like a miracle, so many generations of children have wanted mangoes in winter, and here it is,” Pandey said. 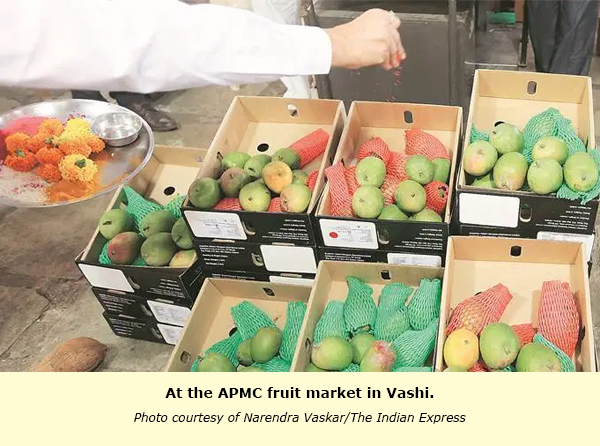 Malawi mangoes, grown in their namesake African country by a European-African firm, Malawi Mangoes Ltd, are being marketed as “99 per cent similar” to the Ratnagiri Hapus. Malawi is a landlocked country in southeast Africa, between Zambia and Tanzania.

“Around 8-10 years ago, grafts from Alphonso trees from Ratnagiri were taken and planted in Malawi, with the root stock of local mango available there over 1,400 acres,” said Niranjan Sharma, Pune-based Indian representative of Malawi Mangoes Ltd. “These fruits are almost identical to Alphonso in Maharashtra, but have a different cycle as Malawi is in the southern hemisphere.”

Sanjay Pansare, a fruit merchant from Navi Mumbai who is the wholesale seller of the fruits at APMC market, said this was the second year the fruit was imported. “Last year, the mangoes were imported for the first time. Since it was the first time, the import was around 20 tonnes. However, demand is very high and thus, this year they are going to import over 100 tonnes,” he said.

On Tuesday, the price of the mangoes started at Rs 500-700 per dozen. “The boxes that come have 9,12, 15 or 16 fruits depending on the size of individual mangoes. This is how much the Ratnagiri Hapus opens to as well,” Pansare said.

India, the home of the patented Devgad mangoes and over 40 other varieties, doesn’t allow mangoes to be imported from all countries, Sharma said. “However, the mango trees in Malawi have a season from mid-October to mid-December, unlike the Indian variety which has its season from January to August. Since there’s no clash, it is a win-win situation for both countries. The Indian High Commission in Malawi helped us tremendously in getting approval,” he said.

Malawi, where horticulture is a large sector, has warm soil suitable for mangoes. “Fruit farming is an important job provider in the country. With mangoes being lucrative produce, more ventures might come up. If they do, we will import more,” Pansare said.

While the company claims the fruits are almost identical to those grown in Konkan, mango farmers from Ratnagiri disagree. “No one can copy the Hapus that we grow. These trees are our family and right from the flowering season to the harvesting, we treat the mangoes as babies. You can grow different varieties everywhere, but the conditions available here, like the soil, water and proximity to the sea, are unique,” Bhai Samant, a mango farmer from Kumbhawade in Ratnagiri said.

Customers, on the other hand, say there is little difference. “They are as fleshy, juicy and scented as Hapus. The only difference is that they are available in November-December,” said Shailaja Gupta, a housewife from Vashi. “It is nice that we don’t have to depend on overpriced, cold storage mangoes in winter,” she added.

“We have gotten very good response and the Indian government has a high parameter to allow import, which means only the best quality fruits make their way to Navi Mumbai and Pune. The fruits are circulated pan India from these centres. We are looking at growing the business further, depending on the response this year,” Sharma said.