In an incredible act of generosity, a Queensland man is opening his orchard, donating his bumper crop of more than 200,000 mangoes to local charities and drought-affected communities.

Brian Burton never planned on becoming a mango farmer, but when he purchased Lake Barra Cottages between Gympie and Tin Can Bay on Queensland’s Cooloola Coast, the picturesque property came with 2,300 Kensington mango trees. 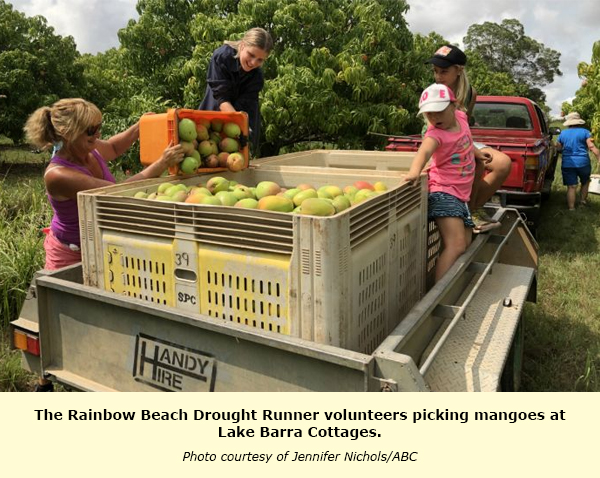 He considered selling the fruit to a major supermarket but did not like the terms of the contracts and so donated his first crop to charity back in 2018.

“I’m going to do this probably every year now — any small small charities or women doing chutneys and that for the school fetes, they’re all welcome to come and pick them all for free,” Mr Burton said.

Repeat effort
In 2018, local pensioners were among the recipients of the tasty mangoes.

Last year storms destroyed the crop but this year an entire hillside of trees is laden with fruit that needs picking within weeks.

Dozens of volunteers from Rainbow Beach Drought Runners are among the people working to share the businessman’s spirit of generosity.

Tony Stewart is currently interstate but worked with his fellow former Gympie Citizen of the year recipient, Marlene Owen, to organise volunteers to pick the fruit for transport.

The plan is to deliver the bounty to drought stricken communities including Chinchilla, Miles, Roma, Mitchell, and Biloela that the Rainbow Beach Drought Runners have been visiting for years.

Looking over the orchard, Ms Owen considered the large task ahead of them. “I know I do some silly things, but I just looked down the hill and think ‘how silly am I?'” she laughed. “But when I have been out to the farmers, trust me, it is well worth it to take fresh fruit out to them.” “And wherever else we can find farmers that would like mangoes.”

Hot work
Many hands are helping make lighter work of the task in hot and humid conditions. “There’s about 30 of us here today,” Ms Owen said. “Tomorrow, there should be about another 30. “Our community is a wonderful community.”

Mr Burton hoped that his donation to the Drought Runners would help lift the spirits of people doing it tough. “I’m hoping it perks them up, gives them hope,” he said. “I haven’t been a farmer for long but the farmers all here have helped me to learn about farming, because I’m from the city and they have taken me under their wing that taught me to fence, taught me to run cattle. We stick together.”

Mr Burton said logistics and the risk of spreading fruit fly in the spray-free mangoes prevented them from being sent interstate to fire victims. But he urged any Queensland charities wanting to pick free fruit now, or in the future, to contact him at Lake Barra Cottages.

Ms Owen praised Mr Burton for opening up his farm to help people in need. “Brian, you’re a champion, you’re amazing, thank you,” she said.