Australians are being encouraged to eat more pineapple for the remainder of the summer to help growers deal with a glut in the market. In central Queensland, drought-affected crops are finally ripe for the picking and growers are run off their feet to get the fruit to consumers. But the late timing means growers have missed the high demand of the summer holiday period and the prices that went with it.

“Fruit quality is really good, sweetness is amazing but there are just a lot of pineapples out there,” Tropical Pines sales director Joe Craggs said.  “I think the combination of production that’s come from central Queensland and some of the other areas has created a glut, certainly in the last week, with a lot of pineapples in market and in stores.”

Mr Craggs said every pineapple was vital income to growers still feeling the impacts of drought. “We’ve got a lot of young plants in the ground that desperately need moisture,” he said. “Every pineapple that’s taken two years to grow and harvest is critical income … everything counts.” 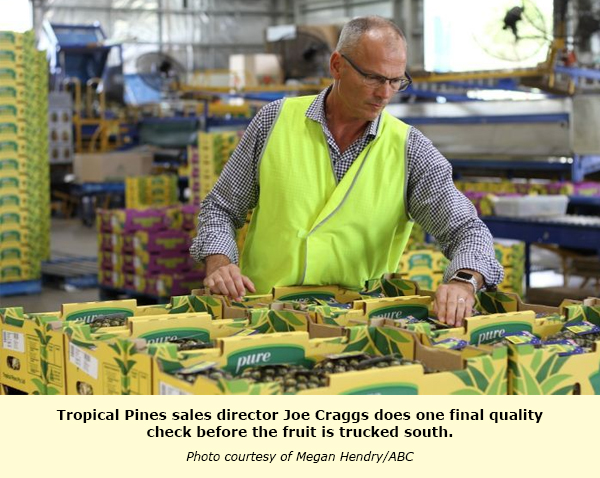 More than 70,000 pineapples a day are being packed at Tropical Pines in Yeppoon with most bound for southern states. While the fruit is in abundance, Mr Craggs said there was not much appetite compared to previous years.

“It’s a tricky start to the year; we’re just trying to give the crop and growers the best possible chance,” he said. “We know Australia is doing it tough in terms of the residual impact of bushfires and everything. “Growers out there are all trying to support each other and we’re just trying to sell the pineapples as well as we can.”

It has been a stressful few months for local growers with the ongoing drought and bushfires impacting properties and businesses. Ryan Brooks is a pineapple farmer at Bungandarra west of Yeppoon. When a fire tore through the area in November, it destroyed Brooks and Sons Farms’ packing shed and millions of dollars worth of equipment.

“We’re rebuilding new sheds, we’ve got some new gear [and] the crop, given the conditions of everything being so dry, it’s been really good,” he said. While the glut in the pineapple market is bringing its challenges, Mr Brooks said things were far better off than they had been a few months ago.

He said it had been a “bit of a roller coaster” with the fires but things were looking a lot better. “[We’ve got a] bit of an oversupply at the moment but we’re all working together to get through that,” Mr Brooks said.

He said the pineapple supply was better to be late and too big than to not be there at all with the industry banding together to make the most of the situation. “It’s all hands on deck at the moment. Everyone is flat out [so] if you’ve got a spare pair of hands, they’re needed,” Mr Brooks said. “We’ve got a fair crew on at the moment [and] we’re planting and picking.”

Mr Craggs said the drought had had a positive impact on pineapple quality with the dry hot summer making the fruit extra sweet. The only trade-off was slightly smaller fruit. “Some of the pineapples have been a bit smaller but the moisture and humidity we’ve got in the last week has helped,” he said. “About 20 per cent of the crop is going to be processed, another 5 per cent [will go] to juice but the vast majority is in retailers all over the country as fresh pineapple.” “They’re pretty good eating.”

It is not only the quality of the fruit that is good for consumers — the oversupply means lower prices at the checkout. “We’ve got a fair way to go but there are a lot more positives than negatives,” Mr Brooks said. The pineapple spike is expected to last until the end of summer.