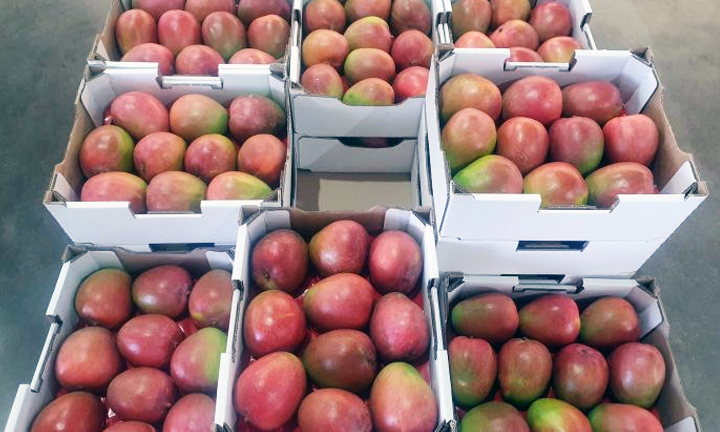 The new mango variety is described as having the skin and flesh texture of an R2E2 mango but the renowned flavour of the Kensington Pride. SOURCE: Brad Bowen/ABC.net

New mango varieties grown on a north Queensland farm have been given the taste test for the first time, with retail trials passing the first hurdle.

The breeds, known by their plant breeding codes NMBP 1243, 1201 and 4069 are potential successors to popular varieties, the Calypso, Honey Gold, R2E2 and Kensington Pride (KP) fruit.

Young trees on farmer Brad Bowen’s orchard at Brandon, 60 kilometres from Townsville were among those to produce their first successful commercial crop.

“We’re over the moon with with quality of the fruit, the flavour, the shelf life, all very positive,” he said.

While the colours of the fruit are more heavily blushed, they strongly resemble the usually yellow-skinned Kensington Pride mango in flavour.

“You’ve got the flavour of the KP but you’ve got the beautiful R2E2 flesh: the texture’s fantastic and they just last,” Mr Bowen said.

“They tend to be the one I go to when any family and friends come — we always give them one of the new varieties and they say it’s their favourite.”

The mangoes have been sent to various markets where they were evaluated by wholesalers and retailers for flavour, shelf life, popularity and ease of handling.

CEO of Australian Mangoes Robert Gray said the process of entering new fruit into the marketplace was a lengthy one.

“We’ve had about 1,000 trays in total this year so it’s still very small numbers,” he said.

“We expect over the next couple of years we’ll be getting a few thousand from each farm across the regions, so we’ll be able to assess them more thoroughly.”

With an overheated domestic mango market reducing prices, the industry is aiming at exporting 20 per cent of the crop.

The R2E2 genetics that form part of the new varieties could help to improve the present export rate of about 12 per cent, or 7,000 tonnes.

“The R2E2 has a few more opportunities, the texture is much smoother, they’re a big mango so you really get a good meal,” Mr Bowen said.

“So good colour, they’ve got quite a lot of red on them, good shelf life, smaller seed,” he said.

“Hopefully they’ll also allow us to expand into new markets and new consumers who aren’t currently engaging in mango supply.

“Early indications are these varieties have that firmer flesh.”

The varieties were developed under a collaborative, 20-year research project involving the Agriculture departments of the Queensland, Northern Territory and Western Australia governments and the CSIRO.

But major issues arose in 2016 when plants were unable to be transferred from the Northern Territory to Queensland, due to biosecurity concerns that required permits be granted.

Mr Gray said the industry had learned from the difficulties of the biosecurity issue.

“We were disappointed it’s taken us a little bit longer to get to this point, but we’ve overcome that hurdle,” he said.

“The last thing we wanted to do in the roll-out of these new genetics was to moving pests and diseases around.

“What might have taken a little bit longer was well worth the effort.”

Concerns about depressed prices have also worried some, after successive seasons of more than 10 million trays nationally, combined with poor financial returns for some regions.

“That will be a key part of our review — are these varieties going to have a positive impact for the Australian mango industry’s growers?” Mr Gray said.

“We’re certainly not doing it to a view of depressing prices at all, quite the contrary.

“We believe these varieties should be looked at to enhance outcomes [for growers].”

Mr Bowen said he would be planting more of the new varieties, on his way to ultimately expanding production to 12,000 trees.

“If we could get it up to 40 tonnes to the hectare that would be our goal,” he said.

“We’ve got more of them going in the next couple of weeks, as they come out of the trial phase and we start going into commercial phase we’ll keep planting them.”