NETHERLANDS: More and more hands of bananas in Dutch greenhouse 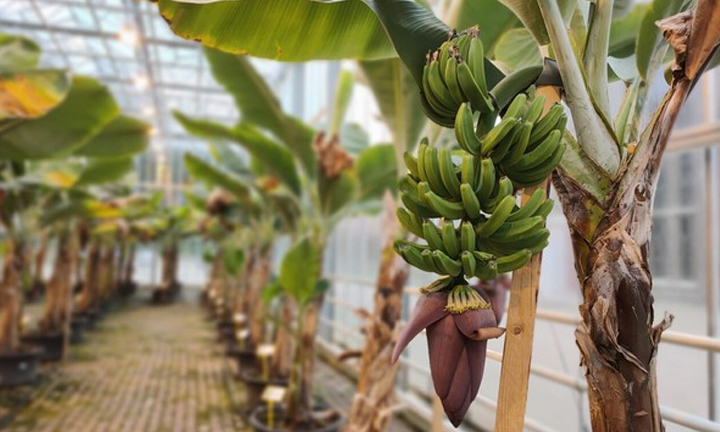 Bananas grown in a greenhouse in the Netherlands

The Neder Banaan greenhouse in the Netherlands now boasts fully-fledged banana bunches. In June, the first flower appeared and the first Neder Banaan was ‘born’.

Roughly 100 banana trees grow in the greenhouse. Some are for research purposes, but some bananas will be marketed. And they’ll be used to make beer, snacks, and even lingerie. That’s what Pieter Vink, the NederGroep’s Sales and Operations Manager, said earlier this year.

Not all varieties blossom at once
An update from the greenhouse indicates there are more flowers with little bananas attached. The lights and heating provide an optimal, high humidity climate. So, the plants can use all their energy to grow these fruits. The banana growers have shared photos of this in the update.

There are currently several bunches of bananas in the greenhouse. Some are a little bigger than others. Some bananas are just emerging from under the flowers. They’re slightly thinner than the first bunch.

Most of the Cavendish bananas have now bloomed. The Gros Michel, plantains, and beer banana trees were planted later. They will, therefore, also produce bananas later.